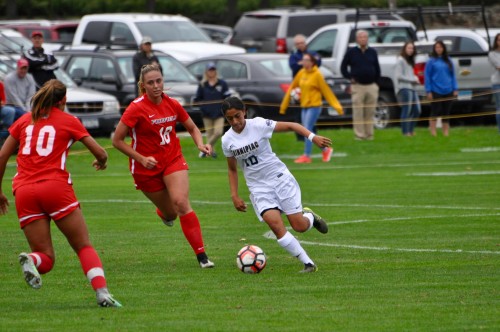 Quinnipiac women’s soccer defeated in-state rival Fairfield University at home on Wednesday by a score of 2-1 to snap a three-game losing streak.

It was the first win for the Bobcats since their 1-0 win at Bryant on Sept. 7. 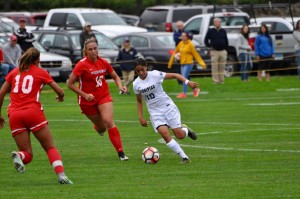 The Bobcats got off to a strong start, controlling the ball for the majority of the first half. Opportunity came knocking on the Bobcats door when they were awarded a penalty kick with 17:51 left to go in the half. Senior midfielder Kelly Caruso took the penalty kick. Caruso aimed for the bottom right corner of the net, where she was able to sneak it past Fairfield’s goalkeeper, sophomore Megan DeFeo, who dove in that direction, but was unable to get to the ball quick enough.

The Bobcats struck again with 5:05 left to go in the half. Senior forward Jess Fontaine threw the ball in to sophomore forward Jess Gargan, who passed it to the center where freshman forward Ally Grunstein was there to head it in. Grunstein, who scored her third goal of the season, is now tied with sophomore forward Nadya Gill for most points on the team with 10.

In the second half, Fairfield controlled the ball for the majority of the time. The Stags were able to cut Quinnipiac’s lead in half when freshman back Melanie Hingler scored on a header with 26:45 left to go in the game.

Despite coming within one goal, Fairfield was unable to score a second time and Quinnipiac held on to win the game.

This was the first time the Bobcats played at home since their 6-2 win against Delaware State on Sept. 4.

“The players are staying in their own rooms. We’re doing everything consistent, the locker room, the training. We know where everything is.” head coach Dave Clarke said. “When you go away, we’re traveling nine hours to Niagara, we’re getting off the train and we don’t know what to do.”

Sophomore forward Jess Gargan echoed that message and was glad to be back at home.

“The crowd helps, parents being here and practicing here everyday on the pitch.” Gargan said. “We’ve been playing on turf lately and it’s not been helping us, so it’s good to be back on grass where we’re used to.”

With this win, the Bobcats improve to 1-2 in MAAC play and stay undefeated (4-0) at home.