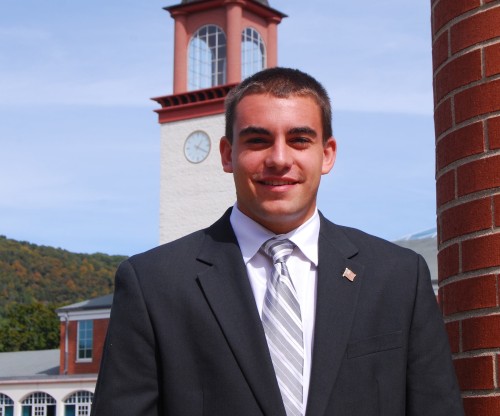 The Quinnipiac University College Republicans (QUCR) organization is making a comeback on campus in the prime of the election year.

The student-run group was chartered back in 2004 and has fluctuated in activity over the years, though this year the group is back and ready to stimulate change on campus, according to senior accounting major and QUCR Chairman Kevin Casserino.

QUCR was dormant when he got on campus his freshman year and it wasn’t until he and Tessa McKinley, the former QUCR chairperson, started emailing people around campus that they were allowed to start up the organization again, according to Casserino.

“In just the last two semesters we’ve had over 90 people sign up in the Involvement Fair so there’s definitely a need and a want for the club on campus,” Casserino said.

Now, the group plans to reach out to students around campus and encourage them to get more involved in the political process. QUCR is uninterested about whether students plan to specifically join the Republican or Democrat chapter at QU, but instead finds it very important that students are registered to vote and understand both candidates and their vision for America, according to Casserino.

In such a politically charged time period, the QUCR strives to make students more politically aware, according to Casserino.

“Just the sense that I get from a lot of students is more along the lines of they don’t want to associate themselves with politics right now. And they don’t want to get to know too much,” Casserino said. “They often say that they’re not going to vote because they don’t really know too much about politics. And that’s really what we’re trying to nip in the bud. You know we really want people to understand what’s going to happen in the country.”

While the group’s goal is to make students more politically involved and informed Casserino said he does understand that politics aren’t an easy topic to talk through.

“So it’s really just to get people more involved in the political process and hopefully be able to talk civilly and personally between each group and with each other,” Casserino said. “Because politics in current times is a very heated subject and you know it really doesn’t have to be. It’s just different ideas.”

In the wake of the first presidential debate, Casserino said there are several key topics that are being talked about that affect the current generation.

“For example, I know for some of us the debate of free college education and student loan relief are gonna be huge talking points in the next coming years. I mean at all universities you’re seeing huge price increases,” Casserino said. “So I think there’s a lot of things college students could get involved in and educate themselves more in so they can make informed decisions.”

As a Republican woman, Ziner said she finds that the masses make assumptions about her stance on matters based on her political affiliation.

QUCR is planning its first meeting for next week and Casserino said the goal is to encourage students to meet and express themselves.

“We encourage more people and the more diverse people the better. It’s not just Republicans in this club,” Casserino said. “We have a lot of people come to us and say, ‘Can I still come to your meetings even though I don’t believe in this,’ and we always say, ‘Yeah absolutely.’ Discourse and conversation always leads to good results in my opinion.”