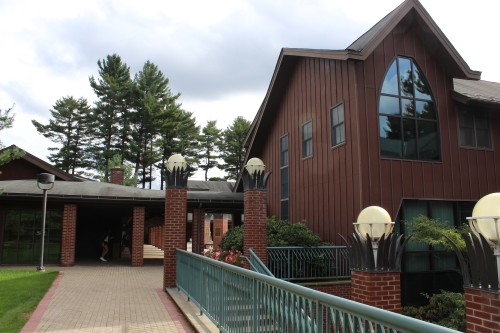 English classes are held throughout the three College of Arts and Sciences buildings.

English 102 Theater is in its tenth year as a course at Quinnipiac. The course, as the name implies, incorporates the English 102 curriculum with a focus on theater.

“I didn’t even know it was around last year,” sophomore Rosie Persiani said. “I feel like it’s an English 102 class that if you want to go through a scriptwriting major, you might check that out, but I was never really introduced to it.”

Students may think of English 102 as a typical English class based upon literature. However, this is not the case with English 102 Theater, according to Professor Anita Appelbaum, who teaches the class.

“A lot of people think that because it’s theater focused, rather than literature focused, that it’s an elective and that they would still have to take a separate 102,” said Professor Appelbaum. “It fulfills the English composition requirement for spring semester. It is not an elective,” she said.

As for the coursework, students in the class read three plays and then get to witness the productions first hand via trips to the theater. Students taking the class this spring are scheduled to witness three productions live: Sunday, Feb. 5, Sunday, March 5 and Sunday April 2, according to Professor Appelbaum.

“All 102 classes are based on the concept of argument. This is an out in the world type of argument that theater critics really have,” Appelbaum said. “We read the play in class and then talk about it. It’s usually a pretty lively discussion. Then, I ask students to focus in on an aspect of the script.”

Students then get a firsthand chance to witness the production on stage. Appelbaum said going to the theater helps students see the characters they will write about on-stage and helps them develop opinions on whether the director accurately portrayed the character or not.

“I try very hard to find scripts that students will be interested in and have connections to,” she said.

Despite focusing on theater, the class has no requirement of previous experience in the theater, Appelbaum said.

Appelbaum said while previous theater experience is not required, what is required is an interest in learning about theater.

“I came into the course with an interest in theater. I had no intention of majoring or minoring in it, I was just interested when I read the description of it when I was registering for courses,” sophomore Luke Basralian said.

Basralian took the course spring semester of last year. He described what made his experience in the course special.

“My favorite part of the course is that we got to read in class and then we actually got to go see the production. We went to New York, we went to Hartford Theater and Playhouse on Park in Hartford,” Basralian said.

As far as registering goes, students can always pre-register to take the course in the spring semester.

“We are happy to pre-register people into this course, starting now. We already have three people in the course,” Appelbaum said.