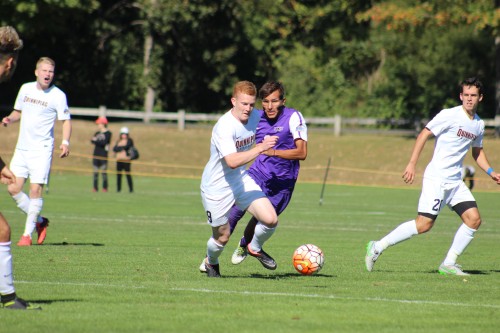 The Quinnipiac men’s soccer team fell to Niagara in overtime on Sunday afternoon in Hamden by a final score of 1-0.

The match’s lone goal came at the 95:39 mark when Niagara midfielder Bautista Pedezert struck one in off a free kick. With the loss, the Bobcats fall to 4-5 on the season. The Purple Eagles snap a four-game losing streak and improve to 2-5-1. 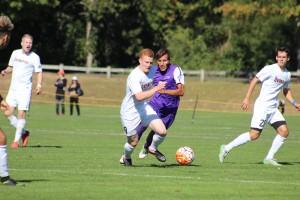 This match marked the beginning of MAAC play. Quinnipiac was one of only four MAAC teams to win four games before conference play began, but the team knows that how they play in the conference will determine its fate.

“It’s a conference game. Everybody starts with a clean slate and everybody is looking to do what Niagara did today, pick up as many points as possible,” Quinnipiac head coach Eric Da Costa said. “Every game is important, our guys knew that, and obviously Niagara knew that too.”

Quinnipiac dominated the first half, outshooting Niagara 6-0. Throughout the game, the Bobcats outshot the Purple Eagles 12-7 and goaltender Chrys Iakovidis made five saves. That is specifically why Da Costa and the team were so dejected after the game.

“It’s about getting results now,” Da Costa said. “When you have that much possession and dominate the game, you have to put your foot on the gas and try to get something out of it.”

Da Costa says the Bobcats were clearly upset after the loss, believing they should have won a game in which they seemingly dominated.

“They’re devastated, and they should be,” Da Costa said. “We played a good game, we controlled every aspect of the match offensively and defensively. We limited their opportunities and created playmaking opportunities. The only thing against us was luck.”

Looking forward, Quinnipiac travels to Poughkeepsie, New York on Saturday to take on Marist, another MAAC foe. The Bobcats look to quickly forget this tough loss and shift their focus to Marist.

“We’ll pick ourselves up and take a look at Marist and try to pick up some points there, Da Costa said. “We’re going to prepare this week for the challenges that they present.”

Marist sits at 5-2-1 and will begin its MAAC play against Quinnipiac. Da Costa showed a clear sense of confidence in his team going forward despite the loss.

“We’re going to be competitive and have a chance to win that game.”