Inside the mind of a tour guide 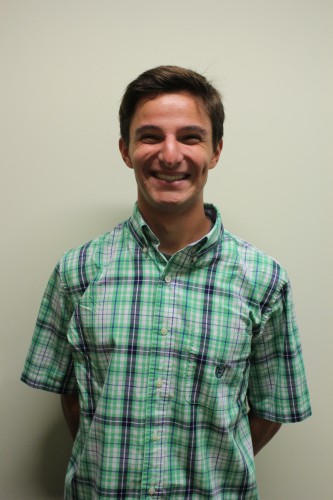 Ryan Cuttitta, a sophomore biomedical  sciences and media studies double major at Quinnipiac, used to make fun of tour guides. “I just thought it was a waste of time,” Cuttitta said.

As a high school student, he never fully grasped the meaning behind being a tour guide or what the job even really entailed. Fast forward a couple years and Ryan is defying his high school self as a full fledged tour guide who openly expresses his love for the job.

Many college students were given a tour of several, if not dozens of colleges before they made their final choice that would seal the deal for the next four years of their life. Their tour experience could have vital effect on their decision, depending on what light they shone upon the particular school.

Here at Quinnipiac, tour groups seem to be everywhere. They often travel in large packs, blocking a student’s normal path to class or to Mondo’s and have the reputation of even being “annoying” to some. This unconventional herding of prospective students and hyper-curious parents may have been reason why Ryan didn’t take a liking to the idea of tour guides at first. However, after his orientation leader gave him a new perspective on the position, he immediately wanted to get involved.

“It’s something special to bring people to university,” Cuttitta stated, his passion for the job, clearly evident on his face.

Like any other dream job though, the process of becoming a tour guide was no simple task. The first step is volunteering for four months in admissions, usually in either a fall or spring semester, after which you get either hired on full staff or as a session-only tour guide. Memorization of various facts and details about QU is necessary, and was the most difficult part for Cuttitta.

A tour guide must embellish everything Quinnipiac is about only the rough hour that they are able to have with the potential students. They must cover topics from academics to athletics and from campus living to extracurricular activities. They must be equipped for any and all questions that come at them, but sometimes, they recieve questions that no amount of preparation will help them answer.

The craziest question Ryan ever received? “Where do you keep the chickens?” Apparently, unbeknownst to him and practically all other Quinnipiac students, we used to have chickens, and a small farm program, 10 to 15 years ago before the current Center for Communication and Engineering building was built.

Aside from out-of-the-ordinary questions as such, Ryan also likes to keep things engaging.

“I get to put my own spin on things, kind of give them my personal relations as to why I came here and as to what makes a difference on being on this campus than any other campus in CT or in the nation,” Cuttitta said.

Cuttitta will also point out particular features of our school to potential students. His favorite? The business school. When the tour reaches the building he’ll say, “At nighttime when the lights turn on, it’s like a ‘Harry Potter’ movie when you walk through it.”
When asked what his favorite thing about being a tour guide is, Ryan Cuttitta immediately mentions the whole of admissions and the group of tour guides themselves that no doubt hold a special place in his heart.
“We all have very, very similar personalities. We’re all outgoing,” Cuttitta said, even taking into account those who try out to be a tour guide and are not as extroverted but leave the program completely flipped the other way.

Everyone within admissions is very proud to attend Quinnipiac. “It feels like a very happy and homely place to be, almost another sect in itself,” Cuttitta said. Cuttitta couldn’t be prouder representing QU and feels that being a tour guide is a complete honor.

So, what would be the downside of being a tour guide?
“Walking backwards because I’ve almost fallen down a couple staircases,” Cuttitta said. He chuckled slightly, saying that thankfully it was a pretty easy skill for him to pick up, just something that he had to get used to. Aside from the occasional trip up, anyone who met the sophomore tour guide can easily see how much he genuinely loves his job.
“You literally have to be yourself and very, very understanding of their situation too, because you don’t have a clue where they’re coming from until they say, you don’t know where their background is, what they’re really interested in,” Cuttitta said.
“You want to give them the full aspect because I changed my mind five times my first year. You never know and it keeps switching around. It’s about being flexible too, that’s a key thing.”

With the Open House coming up on September 24th, tour guides will be busier than ever. Nervous high school students and parents with too many questions will be entering the quad, trying to figure whether Quinnipiac will be the school that will rise above the competition. It may sound like a daunting task for guides such as Cuttitta, but by being themselves and showing everything we love about the campus, there is no doubt that a new class of Bobcats will get to know each other from tour guides who go above and beyond representing the essence that is truly Quinnipiac University.