And the Emmy goes to… 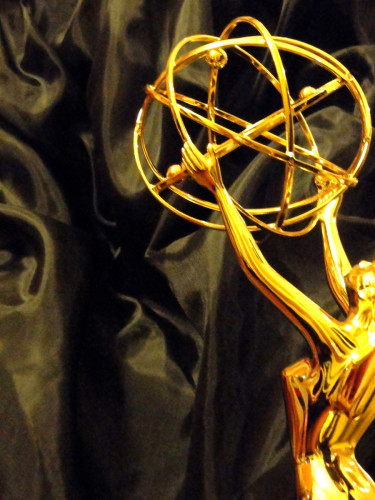 Many actors and actresses walked away with an Emmy award last Sunday, which was hosted by Jimmy Kimmel, for their various roles in hit television shows

Accepting her fifth consecutive win for Outstanding Lead Actress in a Comedy, Julia Louis-Dreyfus took the Emmy for her work as Selina Meyer in HBO’s “Veep.”

“Veep,” now the winner of Outstanding Comedy Series for two consecutive years, focuses on Dreyfus’ character, who serves as vice president, and later on, president of the United States. In her journey helping to run the country and hilarious writing, Selina Meyer learns that holding these positions is nothing like she expected.

Dreyfus joked in her acceptance speech that when the show began it was, “a political satire, but now it feels more like a sobering documentary.”

At the end of her speech, Dreyfus, with shaky hands and a trembling voice, dedicated the win to her father who died two days prior.

“I’m so glad he liked ‘Veep’ because his opinion was the one that really mattered,” Dreyfus said.

Surprises were also at every corner during the awards show.

“Mr. Robot” is a psychological thriller told through the eyes of Elliot Alderson. Elliot joins a secret community of computer hackers called “fsociety” where they plan to take down one of the nation’s largest corporations. The contradictory antihero forces viewers to think critically and question if they even like this ma  in character.

Celebrity fans took to Twitter praising the choice and congratulating Malek on his first nomination and win.

Ellen DeGeneres tweeted, “@ItsRamiMalek, you are brilliant. I hope next season we get to meet Mrs. Robot.” Singer Christina Perri tweeted, “Of course @ItsRamiMalek won tonight! @WhoIsMrRobot is the best show on TV right now.”

Tatiana Malany won outstanding Lead Actress in a Drama series for her many roles in “Orphan Black.” The BBC America original is not as well known as other netorks’ series, but Maslany’s portrayal of clones with distinct personalities and accents is considered unparalleled.

Other winners, however, were not big surprises.

The two most recognized categories had the same winners as the previous year. “Veep” won for Outstanding Comedy series for the second time and HBO’s “Game of Thrones” also took its second win in Outstanding Drama Series.

Rolling Stone, Fortune and other news outlets favored Tambor to win in this category for the second time…and their predictions were right.

Host of the Emmys, Jimmy Kimmel, even made a joke in the opening of the show about the fact that Tambor was so heavily favored to take the Emmy in this category.

“I want to do one quick thing before we get started,” Kimmel said.

Kimmel walked right up to Tambor’s seat and handed him the Emmy saying he won for Outstanding Lead Actor in a Comedy Series.

Tambor smiled and mouthed “Oh my God” at the joke, but nevertheless, later in the night he was officially recognized for the win in that category.

And let’s not forget Jimmy Kimmel’s performance as host. He poked fun at the price of EpiPens, OJ Simpson, Bill Cosby, and even himself. He had celebrities dropping their jaws at the jokes he made.

It truly was an award-winning night.