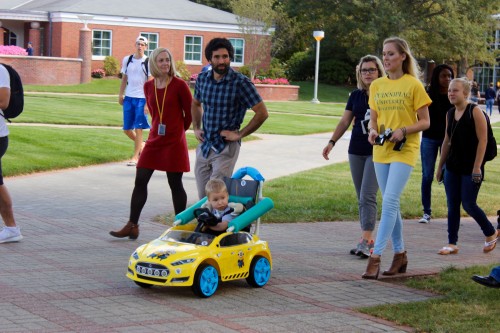 For 3-year-old Nolan Green, everyday things such as walking, eating and speaking can be a struggle.

Green was born with cerebral palsy, a disease that can affect body movement, muscle control, muscle coordination, muscle tone, reflex, posture and balance, according to the Cerebral Palsy Alliance. Because of this, day-to-day tasks that people without this disorder don’t even have to think about are tiring and difficult for Nolan.

Flammang met Green through her job as a pediatric physical therapist at the Connecticut Children’s Medical Center. At that time, Flammang said Green previously used a power wheelchair which required slight head movements to operate it. Due to his young age and insurance restriction, the wheelchair would not suffice.

While in Riofrio’s circuits class last year, Davis took interest in a summer project with GoBabyGo that Riofrio was offering to his students. Davis said GoBabyGo is a physical therapy program that aims to supply more affordable assistive technology to families of young children who need it.

Green’s specific condition has left him unable to walk or talk. He also does not have consistent controllable movement in his arms or legs, according to Davis. Davis and the three professors decided to set out to put together a “modified ride on car” that was specifically suited for Green.

The idea of using a simple ride on car with some technological modifications would be better suited for Green and many other young children, because it would give them the freedom and ability to explore, according to Davis.

Davis said the ride on toy cars are typically more socially acceptable than wheelchairs and the toy car is significantly cheaper.

Flammang said the modified car was completed in increments of a research project over eight weeks.

“When we met as a team to discuss this project, we talked about the basic modifications that we trialed before as well as [Green’s] previous experiences in power wheelchair training, as well as the challenges involved with maintaining positioning, appropriate access and the expansion needed to allow for continued training over time for [Green],” Flammang said.

Davis and Riofrio were given the task of creating an interface that would allow Nolan to drive the car according to Flammang. This means going forwards and backwards, turning and steering in the car.

Meanwhile, Flammang and Broggi used their skills to put together a support structure that would hold Green upright. Flammang said finding a “Minions” themed car was pure coincidence since it fit Green and would be able to take all the adaptations that needed to be made.

“Who doesn’t like minions?” Flammang said. “It is a bonus that it matches Quinnipiac colors.”

The professors and Davis decided to use an accelerometer sensor to detect head movement as means of controlling the car. They also used a push button that would open or close a circuit which allowed the car to go full speed, stop or anywhere within that range.

“In class, we often talk about how independent mobility and play allow children to develop skills in other areas – cognitive, social, and perceptual for example – and how children who have limited mobility may have fewer opportunities for these important activities,” Broggi said. “So this provides a good example of how a therapist can use adapted mobility to assist a child to move through their environment.”

Flammang said she has been working closely with a group of graduate physical therapy students interested in putting together a GoBabyGo event as a capstone project next fall.

“We hope to expand this project to incorporate to more interdisciplinary teamwork with other departments in the university. We would love to be able to make this a resource to families and their children with mobility impairments that Quinnipiac can continue to carry on,” Flammang said.

Davis said her time in the classroom did support her ability to problem solve and learn, but nonetheless she was nervous about building the ride on car.

“I not only had to learn these topics but also apply them to developing a toy car which a child would be using, so there was also some pressure to make sure I didn’t mess anything up,” she said.

Toni Green, Nolan’s mother, expressed her appreciation towards Davis and the professors.

“We have been incredibly blessed,” she said. “There are other people who are not as fortunate. It has been overwhelming. We are very grateful for all the help we have gotten.”

This project not only gave Green the ability to function closer to that of a child without cerebral palsy, it also gave this group of Quinnipiac professors and a student the gratification of helping a young boy in need.

“The best thing that’s come out of this is seeing [Green’s] huge smile and his family’s huge smiles,” Davis said. “Words can’t express how incredible and surreal that feeling is.”