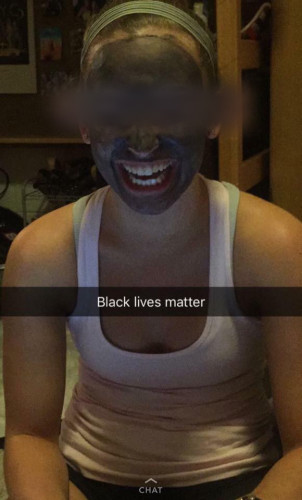 The university took disciplinary action against a student who posted a photo mocking the ‘Black Lives Matter’ movement to social media, according to an email sent to the Quinnipiac community by Executive Vice President and Provost Mark Thompson.

The Snapchat photo went viral on social media, showing a female student’s face covered in what appears to be a beauty mask, with the caption reading, ‘Black Lives Matter.’

Freshman Maya Mascoll posted a screenshot of the Snapchat post to her Facebook page to spread awareness that this was happening on-campus.

“It was a really big shock and I didn’t expect that to happen here,” Mascoll said. “I know other people didn’t either and I didn’t want this to go unnoticed.”

Mascoll’s post has been shared more than 450 times on Facebook. She said the student who posted the photo is a freshman and her first name is Annie, but she does not know her last name.

Sophomore Cassandra Cala said she thinks this situation is not as serious as it seems.

“I think it was blown out of proportion,” Cala said. “It was a joke with her friends. Was it funny for everyone? No. Should it have been posted? No. Everyone does stupid things though and her life shouldn’t be altered because she decided to do something stupid.”

Mascoll said this could have been avoided if there was more education about diversity for students on-campus.

“When I was reading the comments, it was like a lot of outrage and shock because if you look at the creed, it says we value diversity,” she said. “So it’s like the creed is saying one thing and the students are saying another… people are confused and upset about that.”

On Sept. 21, the Student Government Association sent a message to the student body by email reminding students of the university creed.

“After the recent racial incident that took place earlier this week via social media, we would like to remind everyone what it means to be a Bobcat,” the email said. “As members of the Quinnipiac community, we all signed ‘The Book of the Legend.’ This means that we have a responsibility to follow our creed and live by it every day.”

The university posted a statement to the Quinnipiac University Facebook page on Sept. 20 after news of the photo spread across campus.

“The university takes this matter very seriously and acted swiftly to discipline those responsible for the offensive photo,” the Facebook post said. “This incident does not reflect the true nature of our university, where we have a long history of zero tolerance for any acts of racism, hatred or bigotry.”

Thompson condemned the photo in the email sent to members of the Quinnipiac Community on Sept. 20.

“This incident is clearly not reflective of our values as a university community,” Thompson said in the email. “Please know the university has acted swiftly to discipline the individual responsible for this action.”

“Honestly, I think it was really stupid [to post the photo on Snapchat] especially with everything going on in the media,” Davis said. “Everyone does stupid stuff and everyone makes comments they shouldn’t, they just don’t get shared all over social media.”

Executive Vice President and Provost Mark Thompson sent an email to the Quinnipiac community which said the student who took the Snapchat photo and added the caption is no longer part of the university community.

The university did not take any actions against the student who is in the photo because she was not deemed responsible, according to Thompson.

“I ask that all members of our community learn from this experience and work together in ways to enhance our understanding and appreciation for one another,” Thompson said.