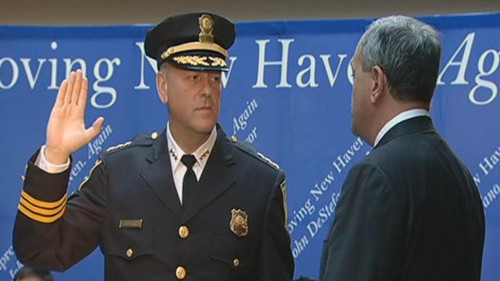 Former New Haven police chief Dean Esserman stepped down from his post on Sept. 7 following disciplinary leave, which started in July and transitioned to paid sick leave on August 16. His resignation was a mutual agreement between Esserman and New Haven Mayor Toni Harp.

As of Monday morning, Esserman is now an employee of Quinnipiac University working in the Public Safety Department, according to a statement by Vice President for Public Affairs Lynn Bushnell.

“Dean Esserman came aboard [Monday] as a senior professional-in-residence for emergency management response,” Bushnell said in a statement.

Beginning on July 25 of this year, Esserman took paid leave of absence amid allegations of conduct “unbecoming of a public official,” according to a statement by New Haven Mayor Toni Harp. This stemmed from reports of Esserman berating a waitress at Archie Moore’s Restaurant in New Haven, according to an article by NBC Connecticut.

On July 7, the New Haven Police Union voted “no confidence” in Chief Esserman with the vote being 170-42 of those present. The union’s vice president said they held the vote due to Esserman’s conduct, behavior and history. Prior to Esserman’s stint in New Haven, he left a position in Providence, Rhode Island, following a “no confidence” vote there, as well, according to NBC Connecticut.

“I just find it incredible that QU, who has so many PR issues each year, whether it be greek life, racial issues or otherwise, would think that this would be overlooked,” Siegel said.

Craig Miller, president of the New Haven Police Union, said nobody would take Esserman seriously if he tried to come back to lead the department.

“He actually did a favor for everybody,” Miller said in an interview with NBC. “Just move on…”

Despite these allegations and the opinions of the police union, crime has decreased overall throughout his time as police chief in New Haven. Murders, robberies, assaults, thefts and burglaries have all gone down since 2011, when Esserman took office. The crime index for the city of New Haven has also declined from 664.6 in 2011 to 510.7 in 2014, with the higher numbers being more severe, according to city-data.com.

With that, Esserman will be analyzing the university’s emergency procedures, according to Bushnell.

“He will examine the university’s emergency response plans to make sure we’re using the best practices to keep the university community as safe as possible,” Bushnell said.

The university did not offer more information regarding his further responsibilities.

Junior Murphy Siegel has a different view of the situation.

“Either he is the most valuable emergency response strategist on earth, or someone is buddy buddy with him. Either way, this guy has no business being employed at my university,” Siegel said.