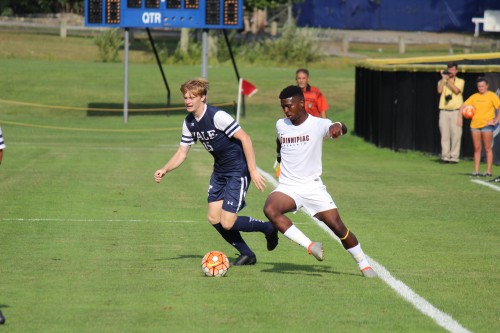 The Quinnipiac men’s soccer team defeated the Yale Bulldogs 2-0 on Wednesday at the QU Soccer Field.

There was very little action between both teams for the first 20 minutes. Yale controlled the ball for a majority of the first half, but it failed to capitalize on just a handful of opportunities, and the Bobcats were unable to do much in the attacking zone. 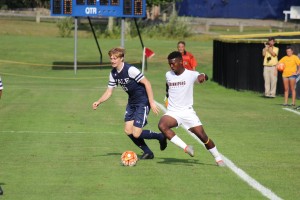 With 17:55 left to go in the first half, freshman forward Eamon Whelan scored off a header to give the Bobcats a 1-0 lead.

“Eamon’s not the type of player who’s picking up the ball at midfield, dribbling six guys and scoring on his own,” head coach Eric Da Costa said. “He’s intelligent, he makes good runs, he makes smart runs and puts himself in really good positions.”

The best scoring opportunity Yale got in the first half was when Bobcats freshman goalkeeper, Chrys Iakovidis tried to field a ball, but ended up colliding with another Yale player. The ball was loose just outside of the penalty box. A Yale player took a shot at the goal, but Quinnipiac freshman defender Jeppe Haehre stood in front of the goal and blocked it with his right leg, saving the Bobcats from giving up a free-bee.Yale was unable to answer before the end of the first half, and the Bobcats took the lead going into halftime.

Despite Whelan’s early success, he gives a lot of credit to his more experienced teammates, senior Ryan Scheiderman and sophomore Rashawn Dally.

“I mess up on the field sometimes and it’s going to happen,” Whelan said. “But by them being there, helping me and talking me through it, it’s a big help.”

On the defensive end, the Bobcats held up just as well.

Iakovidis, who made his first start in goal since coming out of the game against Lafayette on Sept. 4 due to injury, stopped all five shots he faced.

“We started with four rookie defenders and a rookie goalkeeper” Da Costa said. “You put rookies in a position, and you hope that they can excel, and that’s a testament to them.”