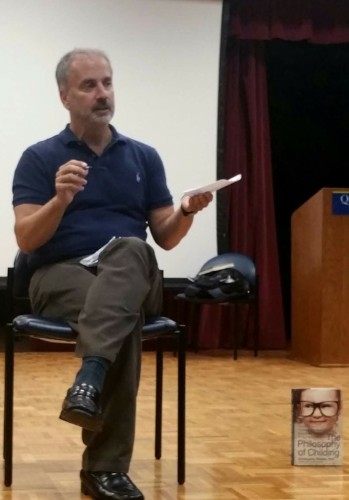 Dr. Christopher Phillips leads a discussion during his visit to QU on Sept. 8.

Curiosity is a quality within all of us that seems to wear out as we grow older. People seem to have become more vetted in their way of thinking and it’s a good time for society to return to a childlike element where we regain our curiosity and are willing to learn more about one another.

This is the idea that American author, educator, pro-democracy advocate and founder of the Socrates Café, Dr. Christopher Phillips wanted to share with the academic community and he did exactly that on Sept. 8 in the Clarice L. Buckman Theater of Quinnipiac University.

Phillips hosted a presentation for students and staff that revolved around socratic inquiry, which in Phillips’ definition, means to explore a wide and embracing variation of perspectives.

“It’s constantly, actively [and] enthusiastically seeking out objections and alternatives to various points of view, where it’s not about argument and counterargument. But it’s more about let’s look as wide of a variety of perspectives as we can,” he said.

The Executive Director of University Teaching and Learning  Professor of Psychology Christopher Hakala and Executive Vice President of Quinnipiac University Provost Mark Thompson provided the funds in order for Phillips to visit the university, according to Associate Professor of English Timothy Dansdill.

“I am a friend of Phillips and suggested that the university bring him to address the issues of inquiry and guiding questions that are at the center of the new First-year Seminar,” Dansdill said.

During his presentation, Phillips stated that it was because of his interest in inquiry that he decided to produce an event where people of different backgrounds can come together and discuss philosophical viewpoints. This event is called the Socrates Café.

Since its creation in 1996, the Socrates Café has inspired many across the nation to have their own philosophical meetings, including Quinnipiac.

“It’s made its way to schools, colleges, communities centers, nursing homes, homeless shelters and prisons, and I often get invited to do these groups,” Phillips said. “It’s so cool that people took my idea and they did far more than I ever had in my imagination to do so.”

Phillips hosted a Socrates Café workshop after his presentation, encouraging his audience to make a list of questions that would be considered both timely and timeless.

Some of the questions included: What is personal identity? How does facing adversity encourage students to be successful? Does any problem have a solution? Only one question was further discussed out of the list which was: What does it mean to know something?

Through engaging with one another by trying to discover the answer to the question, the audience was ultimately left examining their own beliefs and others as well. However, this was a positive thing to achieve in a Socrates Café. It’s not about proving who is right or wrong, according to Phillips.

“A child explores, they don’t argue,” he said. “Adults invented these things called arguments and I think it’s lead us down some really dark roads. Arguments can be fun, but it can also be like you either win the game with your view or you don’t.”

Senior English major Taylor Chelo said Phillips’ presentation and workshop was very beneficial and can be influential for those who are afraid to speak freely.

“What made me want to come to this event was [that] I am a peer catalyst for the first year seminar here and it’s very much based on inquiry and the importance of it. I feel like as college students [where] we’re in seminars and other classes, we’re silenced a lot,” she said. “I think that encouraging this communication… especially when it comes to interrogating some of life’s biggest questions, I think that’s the reason why it’s so important.”

Phillips was pleased to introduce this kind of reasoning to the academic community. He wishes to bring out the questioning nature in all of us through his teachings and the Socrates Café.

He believes that many people nowadays tend to hold themselves back from speaking their mind. Nevertheless, no matter how reserved someone is, anyone can be able to gain enough confidence to open themselves up as well as being willing to genuinely listen to others.

Phillips extends his philosophical knowledge through seven books that he has published, including his most recent release, “The Philosophy of Childing.” Each book takes a different approach on traditional boundaries and helps all types of people how to achieve excellence in thinking.

“We’re all nature philosophers, but we don’t take time these days. We’re so busy about taking classes and getting the grade,” he said. “We need to take an hour every week or two and explore with other people in ways that we’re all answering and further answering those questions of questions.”