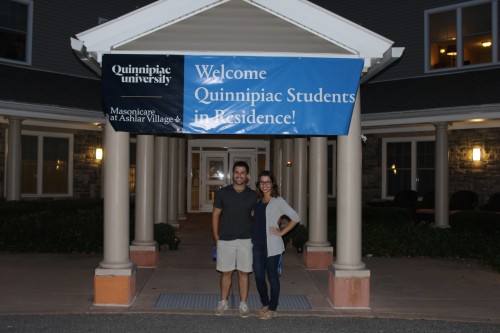 Joe Huberman and Victoria Kozar pose in front of the building they are living in at Ashlar assisted living facility.

Two Quinnipiac students decided to live off campus this year. Housing is free and their hallmates are senior citizen residents of Ashlar Village assisted living facility.

Victoria Kozar and Joseph Huberman are living and dining in the facility in Hamden for the next nine months, through the Students in Residence program. They hope to start creative and youthful programs for the residents while participating in weekly activities and creating deep and meaningful relationships that will benefit them in their future health science-related careers.

Victoria Kozar is a senior health science major and Joseph Huberman is an occupational therapy graduate student. Both hope to go into geriatrics.

The program is run by Marisa Dominello, Grace Martha and Erica Defrancesco. Dominello is the recreation coordinator at Pond Ridge, (where the students live), Martha is involved with memory services at the facility and Defrancesco is the assistant professor of occupational therapy at Quinnipiac. These three serve as Joe and Victoria’s support team.

Defrancesco was part of the team that met together over the course of two years to design and implement the Students in Residence Program.

Kelly Papa, director of corporate learning, had heard about a similar innovative program happening internationally and proposed the idea to Defrancesco to see if Quinnipiac would partner with Masonicare to create the program. Defrancesco polled a few students to see if they thought such a program would generate interest at Quinnipiac; students were ecstatic about the prospect of such an opportunity becoming available at Quinnipiac, according to Defrancesco.

“This is completely extracurricular,” Huberman said. “The idea is to promote intergenerational experiences between people our age and the folks who live here, the senior population. They house us here for free and in exchange, we spend meaningful time with the residents, making sure they have opportunities to engage in meaningful activities.”

Kozar and Huberman had to go through a selective application process before moving into the facility. They were required to write essays ranging from what skills they could bring to the table to what their favorite Disney character was and why. The residents  were also involved in the selection process.

“We’re residents too, so for right now, we do all the same things they do,” Huberman said. “I just played bingo the other day, and I’ll come out here and talk with them. As time goes on, we are going to start to do more structured things, but for the first couple weeks it’s been more or less getting acclimated to the environment and the residents, learning about their lifestyle and learning about the lifestyle of Masonicare.”

Part of the Students in Residence program involved the students offering some sort of “gift” or “talent” to the assisted living community, according to Dominello. She wants to be able to help facilitate these programs between the students and the residents in the community.

“The students have already immersed themselves into the lives of our residents in so many ways,” Dominello said. “Overall, the relationship between the students and the residents is already blossoming so well.”

Kozar and Huberman are just getting settled and getting to know the people at the facility but eventually, they plan on implementing some of their own music and exercise related programs.

“I’m really into music, so I like singing and playing piano and guitar, so doing things with music would be really great,” Huberman said. “We also have the assisted living week which is next week and the theme of that is technology in an assisted living environment, so we want to provide some programs in that category. We also do programs based on the seasons and holidays,” he said.

Kozar has a lot of background in wellness and fitness and is hoping to incorporate that into a program of her own.

“I would like to make it a little more upbeat, maybe try some Zumba, yoga, things that are more youthful,” she said.

As undergraduate and graduate students, Kozar and Huberman go back and forth between Quinnipiac and the facility.

“It’s nice because we are on different schedules so when [Huberman] isn’t here, I am,” Kozar said. “There’s been a little bit of an adjustment period, but we are both pretty good with time management so far, and the residents are really understanding too. There are times when I want to spend more time with them and they tell me to go study. They are very open to the fact that we have things going on as well. It’s the same thing as living off campus.”

Huberman is passionate about bridging the gap and ending the stigma that separates the older generations from the younger ones.

“At the end of the day, I think people are people and age is just a number,” he said. “So to promote that idea, I think this is the perfect way to do it. Back in the day, elders were considered to be the people who looked up to you the most and I do not think that is the case anymore. We need to look up to these people; they have so much to offer.”

Kozar sees a huge divide in healthcare concerning ageism. She feels as though there needs to be an even playing field.

“I am forever hearing things about elder abuse and things of that nature,” she said. “I think people forget what a valuable resource they are. The time was so different and there was so much that they experienced that we will never ever see again. It’s crazy to think that that generation is so old, there probably won’t be a lot of that again, it’s such a wealth of knowledge.”

Defrancesco is hoping that through this program, connections will be formed and skill sets will be shared.

Kozar and Huberman hang out with the same group of residents for morning breakfast and evening coffee, according to Kozar. She goes to some of the women for life advice and has learned a lot about her Italian culture.

“It’s fun that we’ve found common ground with them, even with our age divide,” Kozar said. “I’ve bonded a lot with my culture since I’m Italian, I have a lot of little old ladies who are Italian as well. We always talk about family recipes and the importance of that and just family values also.”

Huberman loves hearing old stories about the experiences that these people have lived through. It’s how he has become so close with the other residents.

“These people have seen so much, there are a lot of WWII veterans here,” he said. “A lot of women who were the first women to do certain things. There are a lot of people that were trailblazers and we have a lot to learn from them.”

Defrancesco plans to expand the program in years to come and is pleased with benefits that the program has provided both the Ashlar and Quinnipiac communities thus far.

“It is hoped that this is the inaugural year of a program that will be around for many years,” she said. “The relationship between Quinnipiac and Masonicare has been strengthened with the development and implementation of this program. We look forward to continuing to collaborate with Masonicare on other innovative programs.”