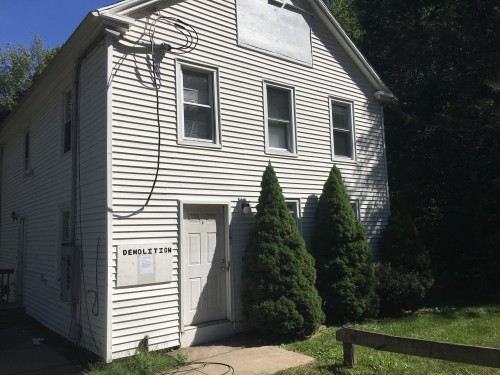 3369 Whitney Ave (above) is one of the houses Quinnipiac is considering taking down.

Quinnipiac is in the process of knocking down some of its unused homes along Whitney Avenue. The school will then put in landscaping work on these properties, so the land is in reserve for future projects, according to Salvatore Filardi, vice president of facilities and capital planning.

Todd Levine, chairman of the Hamden Historical Properties Commission, said the value in preserving the buildings lies in keeping the past alive.

“These buildings are a reflection of a time past, where we came from and a reminder of how communities used to be. They were more tight-knit. There was a sense of togetherness,” Levine said.

Even though he can understand the reasons for wanting to keep these buildings intact, Filardi doesn’t feel the houses serve any worthwhile purpose for the school. In fact, he said part of the reason why the houses are getting torn down is because of their reputation as party houses.

“They’re known houses that year after year have had student parties, and [we] regularly got complaints on a couple of them, with students sitting on couches in the front lawn, holding signs saying ‘beep and we’ll chug our beer’ …,” Filardi said.

Partying aside, Filardi also insists that the college lifestyle is different in general than that of a typical Hamden resident.

“Students come home late at night and if you live next door with small children who are already in bed, they come home and wake them up at two o’clock in the morning then that’s not a positive thing,” he said.

For all the issues people may take with Quinnipiac, adjunct professor Philip Goduti Jr., who grew up in Hamden and is also an alum of Quinnipiac, feels the school always tries to act in the best interest of the town.

“The University’s been wonderful, from my perspective. They give back to the community. I got a half tuition scholarship because I lived in Hamden,” Goduti Jr. said. “They’ve given Hamden residents a ton of opportunities to go to the school, to work at the school, and they also contribute to the economy in Hamden. What Quinnipiac’s done in the past 20-plus years has been amazing for Hamden.”

Levine feels that the issue isn’t just of concern to the people of Hamden, but also to the students of Quinnipiac.

Even though she is concerned about the houses, and would appreciate fellow students taking action, Zubko feels that the school needs to do what’s in its best interest.

“I already know from last year to this year, just having so many more freshmen…that the school is getting more packed… for [the] benefit of students not feeling crammed, it would be worth it,” she said.

Members of the Hamden Historical Society are currently planning on meeting with the university, according to Levine. Due to the age of the homes, the school is currently in the middle of a 90-day waiting period before being able to knock them down. Levine hopes that there can be a way to preserve the houses that both parties can agree on.

“I think it’s important to be reminded of the past, when community meant something different, and with the loss of these buildings, these visual reminders will be gone. That sense of community, visually, won’t be there any longer,” he said.