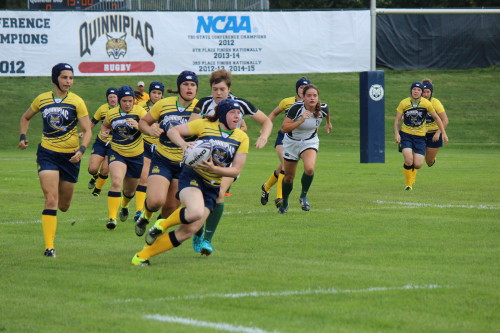 Quinnipiac’s women’s rugby team earned the school’s first national championship last season, going 11-2 on the year and defeating Army 24-19 in the National Collegiate Varsity Women’s Rugby Association (NCVWRA) Championship game. Although it is the team’s title to lose, it is making a new mission for the new season. 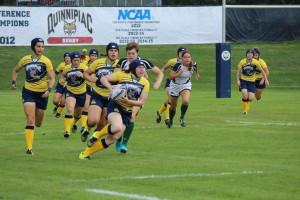 The Bobcats no longer have the NCVWRA to reclaim. The conference has added five new programs and renamed itself the National Intercollegiate Rugby Association (NIRA).

With a bevy of new opponents entering the NIRA, Quinnipiac opened its season on Thursday with a rematch against Army.

“I think it almost gets the nerves out. We can think of them as our biggest competition,” senior co-captain Mason Johnson said. “That can really set the tone for the rest of the season.”

The Bobcats went out to West Point, New York and earned a 32-19 win over the Black Knights for their third straight win in the series. Junior Ilona Maher, another of the three captains on this year’s squad, led the way for Quinnipiac with three tries and an assist. Carlson said Maher, who earned 27 tries in the 2015 season, is able to torment teams by attracting the  defense.

“They can forget about her and she can walk across the try line or she can dish it off to somebody else. Either way, she is pretty unstoppable.”

Maher wasn’t Quinnipiac’s only All-American to strike on Thursday. Sophomore Emily Roskopf, who was second on the team with 17 tries in her freshman campaign, took one to the house off a pass from Maher to give Quinnipiac a second-half lead that it did not give up.

“Em [Roskopf] is definitely a rock. She comes out every game, never misses a beat,” Johnson said. “[She’s] always there, almost a quiet energy.”

The team brought in five freshmen on the season. While none of them scored a try in Thursday’s opener, senior co-captain Maggie Myles believes that all of them are capable of a breakout rookie season like Roskopf.

“They’re all sticking out in their own way at their own positions,” Myles said. “It’s kind of hard now to tell who would be a standout. I think all five of them are here for a reason.”

The addition of five first-year players is not the only change on the field for the Bobcats. Carlson has implemented a new pattern for her team. The pattern is a shift towards anticipation of placement on the field and aims to create a more calculated offensive and defensive approach, according to Carlson.

“What we’ve done is create some keywords and created some key mechanisms so that the team knows where the next strike is, not just ‘this is where the ball ended up,’” Carlson said. “They know, via certain verbage, where that ball is going to be so they can already set and be ready for that. We’re actually conserving a lot more energy and being a lot smarter with the ball.”

The “senior day” game against American International College on Oct. 29 is currently listed for Hamden, but the team has already accepted the idea that they will have to pick up and enter enemy territory every game.

“It is disappointing to have to travel each weekend and it is going to be tough, especially with our studies and body in general, the mental and the physical aspect, but we’re going to take it one game at a time and work through it as a team,” Myles said.

Carlson is not sugarcoating the issue, either.

“What I’ve told them is ‘Let’s just be prepared for this. Let’s be prepared for the fact that you’re mentally and physically exhausted by the time October comes and that’s the last push you have before the championship,’” she said.

The QU Rugby Field served as both the game and practice field for the Bobcats. With the construction, the Bobcats have moved their practices to the soccer practice field. Not only is the playing area smaller than that of a standard rugby field, but there are not posts on the field. Myles says that the team is “just guessing where the ball is going to go” on their kicks. The team made only one of six conversions against Army on Thursday.

“I think every year we go through some type of adversity. This year is no different,” Myles said. “We’re working with what we have been given. We’re grateful enough to have a practice field, at least.”

The Bobcats’ next game is on Friday at American International College in Springfield, Massachusetts. Maher scored five tries in last year’s lone matchup, a 54-21 win for Quinnipiac.

As the Bobcats continue to take their title on the road, they hope to take fans along for the ride and bring a second title to Hamden.

“What’s better than this type of story?” Carlson said. “You move to a different field, you played every single game away and then you win it. That’s way better than just having everything handed to you, isn’t it?”