Josh Glaab is the newest Quinnipiac men’s cross country head coach after Carolyn Martin got promoted as the director of cross country and track and field.

Glaab comes from Colorado, where he coached high school cross country for the past ten years. Although this is his first job at the collegiate level, Glaab has been expecting to make the jump for some time now. 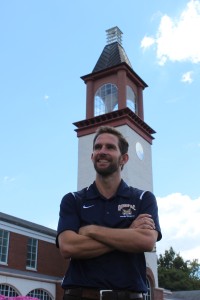 “There was a few other Division I schools I talked with before I got hired by Quinnipiac,” Glaab said. “A small, Christian school in South Carolina was one of the schools that contacted me in the past.”

Glaab wasn’t named as the head coach until July 18, but he had an idea that he was going to get the job before that and got straight to work.

“The process for hiring really started in April. It was long,” Glaab said. “I was actually offered the job before July. It just had to go through some paperwork. I knew it was coming. I spent some time before July preparing to talk to the guys and get ready for that and when they finally officially gave me a letter, it was time to go.”

Even though Glaab is considered to be a highly-respected coach in the cross country community, no one on the cross country team had heard of him when his name was brought up in the hiring process. Once the team started to learn more about him, they liked what they heard.

“I went to Colorado this summer with a couple of my teammates. Going around Boulder and other places, the name Josh Glaab resonated with people. [They] know who he was and said he was a great guy,” senior captain Dylan Fearon said. “That just got us even more excited for the season.”

Although Glaab is new to collegiate coaching, he had a successful running career in college.

“I walked on at Colorado State and ended up being our top runner,” Glaab said. “I went to nationals four times, three times with my team and once as an individual. I ended up with a school record in the 5K at Colorado State at 14:02, which was also a conference record at the time.”

Glaab was also only six spots out from making the All-American team his senior season. He continued to run what he called “semi-professionally” after college, but wasn’t making enough money to continue. This paved the way for him to become a cross country coach.

Glabb says he likes coaching more at the collegiate level because the runners have more passion and he appreciates having a smaller team.

“One of the big reasons I wanted to make the jump was because it’s a better situation for developing relationships which is what I feel like makes the best athletes,” Glaab said. “With a smaller team we can have deeper relationships and get to know each other better. I can also have more of an effect on what they’re doing.”

And his runners have liked the change so far.

“It’s been awesome,” Fearon said. “We just added a strong coach who has a great running IQ, is a smart guy and knows a ton about the sport and cares a ton. Especially in my last year, we want to go out on top and just to have an extra person here who gets to devote 24 hours a day to us is tremendous.”

The Bobcats were predicted to finish in seventh place in this season’s MAAC preseason poll. Fearon and his teammates are welcoming the challenge and think it will make the team stronger.

“I couldn’t be happier that we’re ranked seventh,” Fearon said. “It helps us come to practice every single day with a strong mindset. I know for a fact that we’re not the seventh-best team in the MAAC, or the fourth worst.”

Fearon said that Glaab can guide the team to a strong season.

“We’re going for second [in the MAAC],” Fearon said. “Obviously it’s your goal to win at everything you, but we have a strong team in Iona in our conference who is ranked seventh in the country now and we have to be realistic with our goals. That’s been our goal for the past couple of years. We finished in third a couple of years ago and that was a tremendous season and we’re looking to do better than that this season.”

Glaab also believes his new team can have a great season in his first at the helm.

“Finishing second in the MAAC would be a very successful season,” Glaab said. “We talk about finishing top 15 in the region, and if we have a really great race we can finish in the top ten. That’s the dream.”