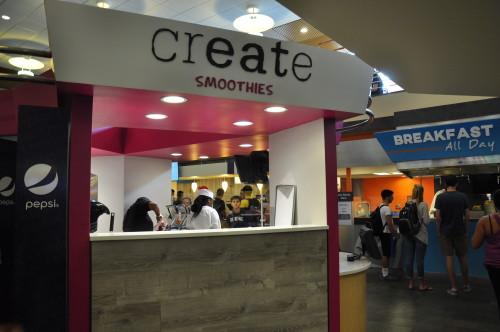 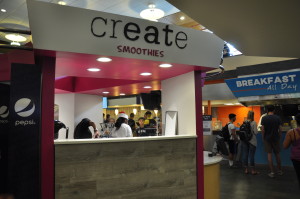 Café Q, otherwise known as the Mount Carmel dining hall, received several major renovations this year to improve the overall appeal for its students and staff, according to the District Manager of Chartwells Dining Services Chuck Couture.

Couture said these changes were made in response to the Fresh Eyes process, a series of focus groups presented last spring semester that encouraged students to be more open and honest about what they liked and disliked about the previous dining setup.

One of the major changes made to the cafeteria was its inclusion of new food stations that offer more variations of food.

“I like the cafe in the fact that there are so many options, and I have absolutely fallen in love with the yogurt station and Au Bon Pain,” Freshman Carley Wainwright said. “I also enjoy Sono, but I do wish for more vegetarian options.”

Chartwells has even created more options for people with a variety of allergies such as dairy and gluten.

“I think the biggest difference is the G8 station,” Couture said. “We don’t cook with the eight major allergens, and that was to serve the population on the campus that has Celiac’s disease or can’t eat shellfish [and so on]. If you know you can’t eat wheat, you can just go over there.”

Pollo is another new station, which focuses solely on making food with different types of chicken.

“It’s unbelievable how much chicken we go through, so we wanted to open up a third deli line and just have it be dedicated to crispy and grilled chicken, buffalo chicken [and] wraps,” Couture said.

Associate Director of Dining Services Leean Spalding confirmed that there is also an increased diversity of food at the Rosse Ville station, which serves meals such as calzones, strombolis and hot Italian sandwiches. Also, at the station Create Global, Chartwells introduces menus that present food from different cultures, inviting people expand their taste buds by trying out more international flavors.

Sophomore Bryan Fitzgerald is thankful for the extended service hours.

“The later hours are a godsend because there were a lot of times where it will close on me just before I would go get dinner,” he said. “Last year, [the cafeteria] closed at 7 p.m., and this year they close at 8 p.m., so a little extra time is helpful.”

The Bobcat Den has also had its fair share of renovations. It is now using a different strategy to serve food to its customers, according to Couture.

“In the past, the Bobcat Den’s food was a rotating hot line, and there was one or two static entrees. They offered that all day, and then there was pizza,” Couture said. “So now, it’s basically the grill with breakfast all day there so it’s more fresh food to order. If you order a burger, we cook it right then instead of pulling it out of a pan.”

Couture said now there is also a new smoothie station called Create, located in the Mount Carmel dining hall, and a kiosk at the Diners’ Express in the Bobcat Den that lets people order freshly made smoothies and milkshakes.

Freshman Jack Zieger enjoys both Café Q and the Bobcat Den’s food, as well as the service given by the staff. However, he also said the prices of the meals on campus should be lowered.

“I truly believe that most of the prices for every food should be knocked down a dollar or two because of the portions that I’ve been consistently served,” he said. “I think the cafe needs to understand that we’re young adults and therefore, we have large appetites to satisfy.”

Aside from the dining changes, the university also decided to be the first unit in the nation to become beta testers for new digital menu boards that will be used for the cafeteria.

Spalding said that the university is planning to add an Au Bon Pain in the Center for Communications and Engineering.

“If we could pull 500 [to] 600 students out of [the Mount Carmel] cafeteria, that would make an impact,” Spalding said.

Couture said so far most of the reactions to the changes in the cafeteria have been excellent.

“You’re not going to please everybody all the time, but I think the general feedback has been really positive,” he said.