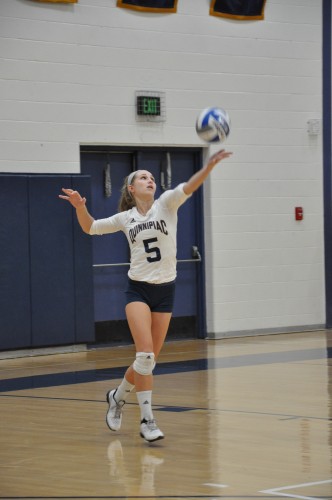 The Quinnipiac women’s volleyball team dropped its third straight game to UMass Lowell on Tuesday night, falling to a 5-4 record. The loss forces the Bobcat’s to wait until Wednesday to get an opportunity to tie their highest win total in 13 years. 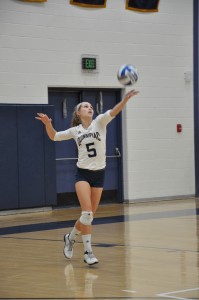 The Bobcats opened the season with one of the best starts in program history, winning five of their first six games. Amidst the current streak, Quinnipiac head coach Kris Czaplinski was quick to express the confidence he has in the team’s ability to win.

“Once you come off a loss like tonight, you want to see how the team responds,” Czaplinski said. “For now, we’re gonna see how they deal with this loss when we come back tomorrow and get the win against Fairleigh Dickinson.”

Freshmen led the way for the Bobcats. Alejandra Rodriguez finished second on the team with two assists while Natalie Alechko earned a team-high eight kills. However, it was Maria Pansari who impacted the most out of the star-studded class, accumulating 29 assists for the game.

“Although they weren’t at their best today, the freshmen have been solid all year for us,” Czaplinski said. “They’ve brought a lot to the team and they’re going to respond tomorrow with a great game.”

Quinnipiac (5-4) will host Fairleigh Dickinson (0-6) Wednesday night at 7 p.m. as it seeks to end its three-game losing streak.