More than 900 students sign up for move in crew 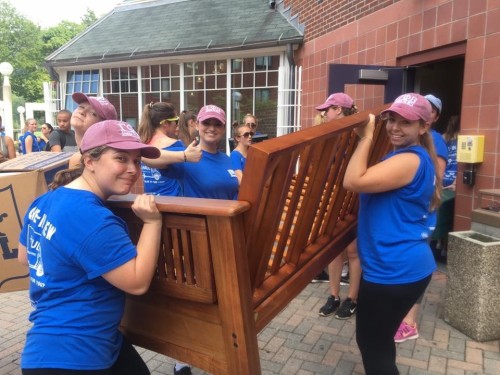 Students volunteer to help freshmen move into their residence halls during Welcome Weekend.

Each year Quinnipiac welcomes its incoming first-year students by having upperclassmen volunteers help move the freshmen into their on-campus housing. This volunteer service allows upperclassmen to move onto campus early to help welcome the new students.

Approximately 950 students volunteered for move in crew this year, according to the Assistant Director of Residential Life Michael Guthrie.

Junior Community Assistant [CA] Alexandria Otlowski said if volunteers checked out earlier than requested, or they didn’t check in or out at all, they received a fine.

A significant number of students were fined for not upholding their responsibilities as Move-in Crew volunteers, according to Otlowski

Guthrie said it was disappointing that many of the students who committed to helping the freshmen had wandered off and did not complete their shift.

“There was an issue with a large number, and by large number I would say I walked through the dining hall and I saw about 25-30 students that were supposed to be at their building doing a shift and instead they were sitting there having breakfast,” Guthrie said. “But I can’t focus on that small number I have to focus on the large number that did help our freshmen.”

A volunteer was fined if they failed to show up to the move in Crew meetings or failed to sign in and out for the day, according to Otlowski.

If a volunteer came early without reason and were found on campus, they could be charged an early arrival fee if they are not approved for any sports, academics or extracurriculars, according to Otlowski.

“I do have very limited knowledge of what actually happened with the bigger problems, meaning the students that were fined for not doing their move in Crew responsibilities,” Otlowski said.

Junior Francine Jacqué volunteered for move in crew her sophomore year because she appreciated when the service was provided to her during her freshman year move in.

“It felt welcoming like I didn’t just come to any school, it felt like people cared,” Jacqué said.

Jacqué said it is not fair to the freshmen and the other move in crew volunteers to move onto campus early and not perform your volunteer duties.

“Some people do it just to move in early and have fun with their friends,” Jacqué said. “When I was volunteering it did get really boring so I feel like that’s why a lot of people ditched or didn’t stay the whole time.”

There are a lot of benefits in volunteering for move in crew, according to Otlowski.

“You get to meet a lot of the incoming freshmen which is awesome,” Otlowski said. “A lot of parents have said ‘this is an awesome thing to do.’ And it really is, it’s really rewarding too.”

Parents even went as far as to thank the move in crew on Quinnipiac’s web page, according to Guthrie.

“They were saying amazing comments like the move-in crew helped make their freshman move-in memorable, and they hope that one day their student will be able to participate and give back to the future generations of Quinnipiac,” Guthrie said.

Guthrie said the move in crew has turned into a tradition at Quinnipiac that every student can remember.

“If anything I would say we need to say thank you to the student organizations that did participate,” Guthrie said.

Despite the issues faced during the move in time period, Guthrie noted that volunteers have gone up about 200 students since last year and that overall the 2016 freshmen move in was a success.