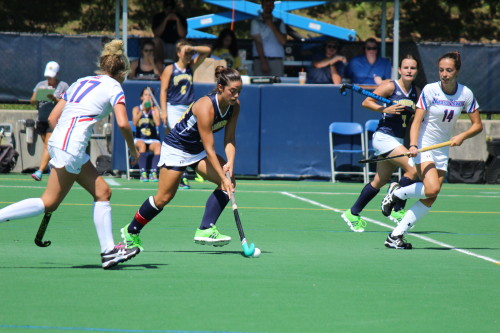 Bobcats’ head coach Becca Main found it difficult to find a silver lining with the result, putting the team at 0-2 on the season with Sunday’s loss and a 2-0 loss to Boston College on Friday. 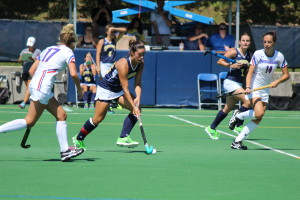 “We played the No. 8 team in the country on Friday and left them in a situation where we saw a hint of really good things to come and then today, yet again, we’re not finishing on the attacking side of the ball,” Main said.

According to the 2015 Metro Atlantic Athletic Conference Coach of the Year, that inability to finish is becoming an “achilles heel” for the team and has to change.

Junior midfielder Dana Barlow, was quick to point out the issue as well.

“I think we just need to learn to make smart choices in the attacking red zone and put the ball in the net when we get the opportunity,” Barlow said.

Savanna Reilly, the Bobcats’ leading scorer in the 2015 season, scored the team’s first goal of the contest. After UMass Lowell strung together two goals, Barlow knocked in a goal to make it a 2-2 game off an assist from Reilly. UMass Lowell’s Kristin Aveni scored the lone goal of the second half to cap off the team’s 3-2 win over Quinnipiac.

While two returning players contributed on the scoresheet, Main implemented some personnel changes on Sunday, including playing Rachel Hamm for the first time.

According to Main, Hamm performed well in her first game, helping to set up a goal for the Bobcats.

On top of that, Main played Selina Reichart at all four midfield positions and rotated in several freshmen.

“We’re still in our tryout phase,” Main said. “I call it our tryout phase until about the 16th when we open at the Big East. We’ll have to make some adjustments and figure out on film what went well and what didn’t.”

While Main was happy with how her subs performed, she feels that because there were so many substitutions and changes, the Bobcats lost focus and often missed their assignments.

The Bobcats also found struggles on the defensive end. While they were only outshot 17-16, they allowed 12 penalty corners while Umass Lowell allowed just 3. Because of this, the Riverhawks were able to generate a lot of pressure.

“I just think we need to make smarter decisions in [the defensive zone] and I think we’ve got to just step outside the circle to avoid those things,” Barlow said.

“[UMass Lowell] had a player open most of the first half,” Main said. “It’s why they scored their first goal so we had to make the adjustments which we did in the midfield in the second half and did a nice job of that for about 15 to 20 minutes and then fatigue set in.”

Fatigue played a big factor in today’s game, according to Main.

“I think our bodies are still tired. We were really exhausted on Friday. That’s something we’re trying to manage — recovery and some rehabilitation of some injuries and things so for us it’s about coming into our trip to Michigan next week and being fresh.”

The Bobcats will take a two-game tour of Michigan when they visit Central Michigan on Saturday and Michigan State on Monday.

Starting Sept. 16 in a home game against Georgetown, the team will face a new challenge — Big East Conference play. Quinnipiac accepted an invitation into the Big East on December 8.

According to Dana Barlow, The Bobcats have stepped things up in practice in order to compete in this new conference.

“When we go to practice, it’s much harder and much more competitive,” Barlow said. “We build each other up and we’re very positive so I think we have a lot to work on, but it’s going to be very exciting.”