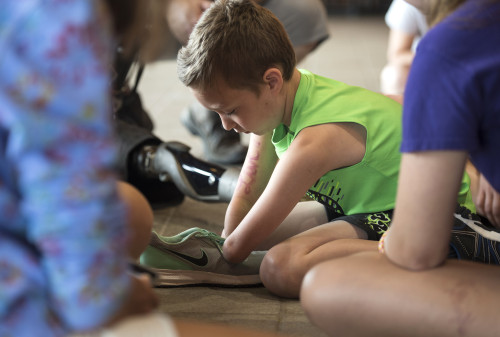 Eight-year-old Sam Becker, of Ithaca, N.Y., learns to tie a knot during an occupational therapy group session on the second day of Camp No Limits Friday, July 8, 2016, at the Rocky Top Student Center on Quinnipiac University's York Hill Campus.

This summer Quinnipiac University opened its doors for a cause and hosted Camp No Limits for the second year. The camp is a supportive place for children with limb loss and their families to learn, play and grow as individuals.

Alissa Rocco, a health science graduate who is studying for her physical therapy doctorate at Quinnipiac, is involved in the camp.

“After seeing the amazing experiences and moments that were created at QU’s first camp, I knew that this was something I wanted and needed to be involved with more,” Rocco said.

The overnight camp took place on Quinnipiac’s York Hill campus from July 7-10 with the help of outside volunteers, health science students and faculty.

“So myself and two of my other classmates decided we wanted to try and take on this project and plan QU’s second Camp No Limits event,” Rocco said. “We had attended another camp in Maryland last September to help us get a better feel for camp and what kinds of activities we could bring to QU.”

The camp started each day with morning energizers and pilates sessions.

Depending on the child’s limb loss, they may attend an occupational therapy or physical therapy session later on.

The sessions focus on strengthening and balance training, from learning how to tie their shoe to buttoning a shirt.

After that the day is spent playing a variety of sporting activities, participating in arts and crafts or trying out sled hockey.

Camp No Limits is a non-profit organization that was started in 2004 and has grown nationwide.

Three years ago, a group of physical therapy students brought the program brought Kimberly Hartmann, an occupational therapy professor at Quinnipiac and the director of Center for Interprofessional Healthcare Education.

Hartmann, the director of the Center for Interprofessional Healthcare Education at Quinnipiac, she is the administrator for the program.

“I personally believe that this experience [at Camp No Limits]  provides fun opportunities for personal growth for campers as well as for each member of the university community involved in the program,” Hartmann said. “We all learned about the strength of perseverance and the joy of all children to be children.”

Jaclyn Davis, a class of 2016 graduate from the occupational therapy program, worked on a student executive committee.

“We learned what morning activities we should have [in Florida], OT/PT sessions were put on to help the campers, and we were able to incorporate the fun and loving nature of camp that we felt down in FL,” Davis said.

They learned how it was run, and what activities they would add into camp as the executive committee.

“From there, our group of students and myself worked on putting together the first ever Camp No Limits at a college campus and the first in Connecticut,” Davis said.

Quinnipiac’s Camp No Limits in 2015 was a huge success according to Davis. With support and love spread between campers, their families and the volunteers.

“Comparing camps is unfair. Each camp brings its own energy and emotion to the space it takes over,” Davis said. “The best part of this year was allowing different students to get a taste of this amazing camp through volunteering.”

Hudson Bradley, a four-year-old child with limb loss, attended Quinnipiac’s Camp No Limits for the first time this summer with his mother Marie Rouleau.

After finding out about the camp online, the two packed up for the weekend and headed to Quinnipiac.

“My son, Hudson had begun experimenting with using his lack of hand as an excuse to not do certain things; this was a brand new behavior for him,” Rousseau said in an email. “We spoke to him about it but that didn’t seem to make a significant difference.”

Davis explained that this year, Quinnipiac succeeded in creating a safe haven for the campers and their families.

“Watching little Hudson tie a double knot for the first time, and the huge smile that spread across his face, that is the best reward I could ever ask for,” Davis said. “CNL is life changing, it makes you realize how lucky you are, and at the same time, how equal we all are.”

Rouleau’s son Hudson was slowly creating barriers between himself and his possibilities, but after attending camp he was able to regain confidence in himself.

“He still talks about working on tying a shoe, how well the bike clinic went, selling 50/50 raffle tickets, dancing each morning (we still do some of the routines at home) and all of his new friends,” Rousseau said. “He left camp with renewed confidence and hasn’t used his lack of a hand as an excuse since!”

Alexandra Delayo, a senior of the graduate occupational therapy program at Quinnipiac, has been at a part of the camp for the past two years. She met Hudson on his first day at camp.

“The second that Hudson entered the Rocky Top Student Center and said hello to me at the front desk, he told me his name, age and starts pulling out the attachments that he has for his right arm which he calls his “lucky fin” because he was born without his right arm below the elbow,” Delayo said in an email interview.

She expected that it would take time for the campers and the small four-year-old to warm up to her but with Hudson that was far from the truth.

“The amount of joy in this little boy, who many would consider different and unable to be successful in life, is inspiring that there are no limits to what any child or individual can do if they maintain a positive attitude,” Delayo said. “This is what Camp No Limits encompasses as its mission.”

Lauren Kline, a senior physical therapy major at Quinnipiac was on the executive committee for Camp No Limits this year.

“It was great to work alongside OT students and experience interprofessionalism in health care first-hand, which was a major goal of this project,” Kline said.

Kline said she hopes to have a future in prosthetic rehabilitation, but she left camp not only learning more about her career, but also herself.

Most of the campers came with a goal in mind and by the end of the weekend, accomplished it with fearlessness.

She someday hopes to help amputees live life to the fullest, as her occupational therapist did for her.

“Camp No Limits was a perfect glimpse at what I plan to do for the rest of my life,” Clift said.

One of the rewarding experiences she had at camp was connecting with a camper’s mother.

“As we talked I could sense that she was concerned for her teenage son missing his right hand. My own mother had nearly all the same worries as I entered high school,” Clift said. “I shared my experiences and told her about the school resources and adaptive equipment I used while driving a car. I believe sharing my experiences with her may have eased her worries about her son, a talented and capable kid.”

She hopes that more kids hear about the camp and want to attend in the following years.

“Last year I served as an OT student volunteer and this year I had the opportunity to be part of the executive committee as an OT graduate student,” Delayo said.

Her original intention was to grow professionally but the benefits of the camp stretch far beyond that for her.

“I have learned how to communicate with families who have incredible stories of strength to tell,” Delayo said. “I have learned that there are no limits to what any person can do if they set their mind to it.”