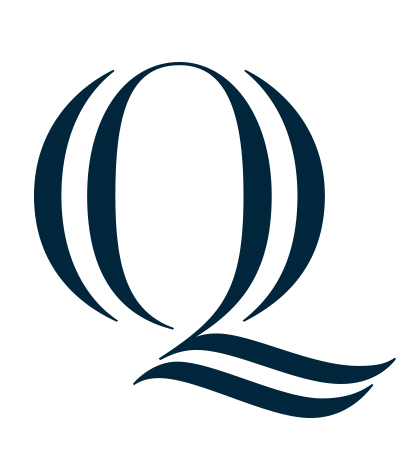 The "Q" is the most prominent piece of the new brand identity.

The university is introducing a new branding identity with new wordmarks, otherwise known as logos, colors, fonts and several other features.

Quinnipiac’s new logo features the university’s full name in navy blue with an emphasis on the “Q” in Quinnipiac while the the “u” in university remains lowercase.

Vice President for Public Affairs Lynn Bushnell sent an email on June 13 stating the new brand was created in order to keep up with the university’s purpose.

“We believe it does a much better job of representing who we are today—a nationally recognized university with a focus on creating extraordinarily well-prepared professionals,” Bushnell said.

Alumna Jennifer Paules said she disagrees that the new logo executes a sophisticated academic presence that Quinnipiac is said to have.

“An alumna’s opinion… It [the logo] is awful. The font is not sophisticated at all. Don’t hand out degrees if you cannot capitalize a proper noun,” Paules wrote in a Facebook comment responding to a post introducing the new logo.

Sophomore English major Nivea Acosta, agrees and said she finds the lowercase “u” the most bothersome about the overall design.

“The lowercase ‘u’ bothers me a lot since ‘Quinnipiac University’ is a proper noun. And proper nouns should be capitalized, including the ‘u’ in ‘University,’” Acosta said.

Although the “u” is bothersome to some, there was a purpose behind the distinction of the “Q.” The “Q” is prominent in the entire brand identity and serves to demonstrate its importance to the university based in its rare use and bold design, according to the Quinnipiac University Brand Identity E-Book.

In addition, the pronounced “Q”  is  the first step in the university’s path to following in the footsteps of other great universities such as Yale and Georgetown and transition Quinnipiac as a standalone name, according to Bushnell.

“If I’m speaking honestly… I think it looks as if they did not spend enough time going over the design process,” Dalton said. “The font choice isn’t terrible, but I feel as if Quinnipiac could have taken a different approach and made the new logo cool and fun. It should be pleasing to the eye and draw people in, not leave people saying, ‘That ‘u’ should be capitalized.’”

Overall, the university’s new branding is key in maintaining its competitiveness as an option for higher education.

“In this highly competitive higher education marketplace, it’s imperative that we continue to carefully and consistently manage our brand identity,” Bushnell said. “Not only for those who already know that Quinnipiac is an outstanding university, but also for those who are hearing about us for the first time.”

Senior biology major Marcella Applewhaite said she understands the discontent with the new logo and has a few questions herself, but the logo should not take away from Quinnipiac’s academic reputation.

“Some people are taking this a little bit too far,” Applewhaite said. “It’s a logo and I understand from a marketing standpoint that a logo for a company, or even a school, is huge. However, we are an amazing school with an amazing reputation. And if incoming students are looking at the logo and saying, ‘Actually, nevermind. I’ll go somewhere else,’ then their heads aren’t in the right place and Quinnipiac could go without them.”