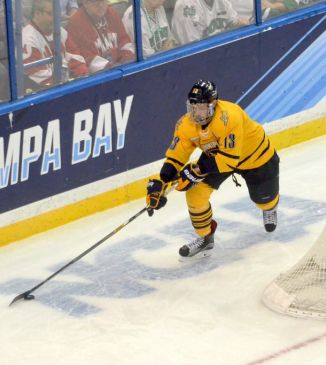 A year ago, Chase Priskie was just trying to crack the Quinnipiac men’s ice hockey roster as a freshman. 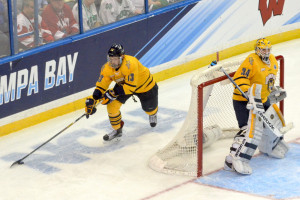 Today he hopes to hear his name called at the 2016 NHL Entry Draft in Buffalo, New York after an eventful freshman season.

“As a whole, my freshman year was just phenomenal,” Priskie said. “From the first day we got here to the last day we said our goodbyes to the seniors, it was one year that will always stand out for me.”

The right-handed defenseman was ranked 183rd among North American Skaters in NHL Central Scouting’s midterm rankings this January, but jumped up 57 spots, to 126th, in the final rankings posted in April.

The rank serves as an ode to a season of improvement for the Florida native, but did not affect the mindset going into the offseason.

“Whether I get drafted or not, that doesn’t really change how I want to approach the game,” Priskie said. “It won’t hurt my game if I don’t get drafted, but it’ll definitely open a door if I do.”

Other NHL-drafted Bobcats, Devon Toews (NYI, 108th overall in 2014) and Connor Clifton (ARI, 133rd overall in 2013), have helped Priskie along the way in efforts to prepare him for what may come on Saturday morning.

“Those guys all season long really helped me with my game whether it was on the ice, in the classroom, or in the locker room environment,” Priskie noted. “It was nice that I got to sit next to Devon Toews in the locker room. Every time we practiced we would get off and if he had any tips or pointers, he would show me and walk me through things that he saw that I could apply to and improve on in my game.”

“They both have helped me throughout the process of talking to some NHL teams, but both in general said to enjoy the process and try to live in the moment.”

Priskie’s freshman year (43 games played, 4 goals, 22 points, +16, and 2 PIM) has catapulted him into serious draft consideration, but his statistics from the past season  act as visual evidence to back up his on-ice play.

Quinnipiac assistant coach and former Bobcat defenseman Reid Cashman has praised Priskie’s efforts to excel on and off the ice.

​”Chase is an elite skater who thinks the game at a high level,” Cashman said via email. “Players who have a great work ethic naturally become leaders and he is a guy who is constantly working on his craft to get better.”

The work Priskie put in began far before the season started in October of 2015, a decision that is untraditional for incoming freshmen.

“I really wanted to improve on all facets of my game off-ice, so I came in early my freshman year, took some classes over the summer which really put me ahead academically,” Priskie said. “But I think the biggest thing was coming in and learning the culture right away from the guys that were there. Being integrated with the core group of guys from the get-go and learning how Quinnipiac lifts really helped me get used to life as an NCAA student-athlete.”

Quinnipiac’s unique offseason training begins with its efforts off ice before stepping foot on ice.

“I think Brijesh Patel, our strength and conditioning coach, is world class and I wanted to work with him pretty much all summer long,” Priskie added. “He watches you work out, he works with you everyday, and works with you one-on-one, so I don’t think you could get any better training than that.”

Once physically prepared to compete at the Division-I level, it was Priskie’s goal to find ice time, however, he found more than just the opportunity to play at even strength. He was placed on the team’s secondary power play unit.

“I definitely didn’t expect to be on the power play coming in,” Priskie said. “What I did was just go out there, play my game, and make the most of it. I started to click with some of the guys on that unit and when the year started we were producing.”

The production was contagious throughout the Bobcats’ lineup. Quinnipiac finished the season with 163 goals scored, good enough for third in the nation only behind Michigan (181) and St. Cloud State (175).

The 2015-16 season will go down in Quinnipiac hockey history books and was capped off with a Frozen Four finals appearance in Tampa, Florida.

While Quinnipiac came up shy of an NCAA National Championship, it built experience and pedigree for its players moving forward.

“You go down there and they roll out the red carpet and you have such a phenomenal experience, but at the end of the day you’re there on a business trip; you’re going there to win,” Priskie said. “We came just a hair short of winning it all, but I think it pushes us that much more that we were that close to winning.”

After the elongated season, the work ethic and self motivation is evident in Priskie’s growth as a player.

“Chase is committed to improving on a daily basis. To do that, he has been willing to make sacrifices,” coach Cashman added. “Chase’s overall game just needs time to mature. He needs to continue to improve on a daily basis.”

Going through the process of being an NHL draft prospect is just a step in the road to next season. Priskie understands his role and is ready to better his Quinnipiac team defensively whether selected by an NHL team or not.

“Now that we’ve lost guys like Toews and [Alex] Miner-Barron — two guys that played heavy minutes for our team last season — one thing I want to do is step in and do more as a sophomore,” Priskie added. “I want to play more time, play more power play, get into a penalty killing role as well, and play more minutes five-on-five.”

“There’s a hunger there; it’s kind of like an addiction in the sense that once you get a little taste you just want more and more.”