The Quinnipiac Chronicle • May 4, 2016 • https://quchronicle.com/54916/news/sophomore-uses-meal-plan-to-make-a-difference/ 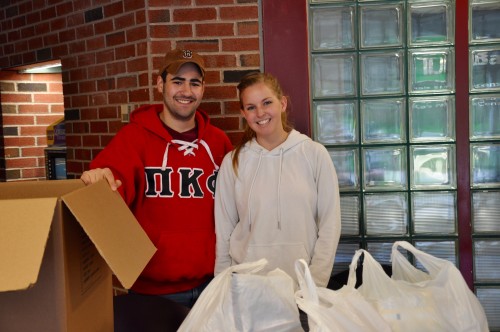 Sophomore Halle Conway has been planning to donate food to food pantries using her extra meal plan money for some time and she has put her idea into action.

The proposition came about when Conway began thinking of how she could give back to her community in Connecticut.

“I have a lot of meal plan money left and I was like, ‘What could I do with it?’” Conway said. “I could buy a bunch of candy but instead of that, why don’t I just do something actually productive?”

Conway volunteers at the Ronald McDonald House in New Haven. There is a food pantry there and Conway figured it could probably use some contributions.

She also contacted the Keefe Community Center and the Jewish Community Center of Greater New Haven. Sandy Hogan, food pantry manager at the Jewish Family Service (JFS) Food Pantry, was thrilled when Conway reached out to her to make donations. Hogan gave her a list of items that the pantry needed.

“As you can imagine, with all the families that JFS helps, the need for food donations is constant and ongoing,” Hogan said. “Although 90 percent of the food we distribute is purchased, we still depend on schools, colleges, other community groups and individual donations to help keep the pantry shelves stocked.”

Conway then talked to her roommates, who told her they were interested in helping out. She then had the idea of posting on Facebook to see who else would want to give to the pantry.

“I talked to the people and they thought it was fabulous that I wanted to donate,” Conway said. “Then I realized that a lot of other people here have a lot of extra meal plan too.”

Once she knew students were interested in participating, Conway wanted to reserve a table in the Carl Hansen Student Center where people could drop off food that they would buy from the cafeteria with their extra meal plan money.

Conway isn’t a part of Greek life or other organizations, and she was worried she wouldn’t be able to get a table. Sophomore Micah Cutler messaged Conway and said his fraternity, Pi Kappa Phi, loved her idea and would be willing to help her set up a table in the Student Center.

“I really like the idea,” Stengel said. “I think that there are people on campus that aren’t able to use that meal plan money and just end up giving it away or spending it on items they’ll never use. This is a fantastic opportunity for the student body to help the greater community.”

Stengel also said the brothers of Pi Kappa Phi did their best to help with whatever Conway needed.

“We really liked her effort and her cause, and we wanted to do whatever we could to make her idea possible,” Stengel said.

Conway made a list of some of the foods that students could donate after she asked the food pantries what they needed and narrowed it down to things that can be found in the cafeteria.

“Kids can use their meal plan money, go in the cafe, buy a bunch of food, not have to bring it up to my room, just bring it to the hallway, dump it in the box and then I’ll take care of it from there,” Conway said.

When Conway reached out to the food pantries, she originally told them it would only be a few people and her donating. The pantries are not expecting so many donations from so many students.

“I’m going to have to talk to them and tell them there’s going to be a little more food,” Conway said.