The Quinnipiac Chronicle • May 4, 2016 • https://quchronicle.com/54879/sports/womens-tennis-earns-third-straight-maac-championship-while-mens-tennis-loses-chance-at-first-conference-title-to-monmouth/ 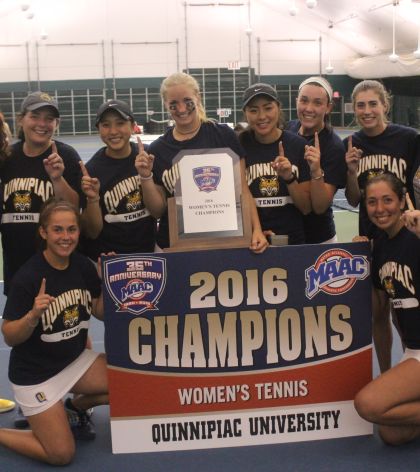 Both the Quinnipiac men’s and women’s tennis teams traveled to West Windsor, New Jersey this past weekend looking to secure their respective MAAC Championships. Yet, after both teams advanced to Sunday’s finals, they each claimed familiar results. 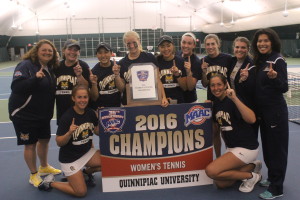 The women’s tennis team won its third consecutive MAAC Women’s Tennis Championship by defeating the Marist Red Foxes 4-3 on Sunday. The win improves the team’s record against MAAC opponents to 29-0 since joining the conference in 2013.

“I think this one was the most special because it was the closest match we’ve had,” Sydney Young, who the conference awarded Most Outstanding Performer of the tournament, said. “In the past, they haven’t been this close.”

The Bobcats jumped on the board first as Jennifer Lu and Proyfon Lohaphaisan won their second-straight 6-0 match while Rachel Horton and Young won their doubles match 6-4.

After Lohaphaisan won the No. 6 singles match, Marist rattled off three straight singles wins to take a 3-2 lead over Quinnipiac. Young and Sophia Dzulynsky were the two remaining Bobcats on the court with the conference title on the line.

“[Young and Dzulynsky] are two players that I had confidence that could pull through for us,” Miller said. “Their fight, their will to win and hard work all season paid off.”

Young, who won her 100th match on Sunday, says that the individual accomplishments and victories do not compare to the team’s success.

Despite the two wins Sunday, Miller says that Young’s impact is just as big without a racquet in her hand.

“[Young] is our biggest cheerleader and she helped this team win by her excitement on court,” Miller said.

With the Bobcats and Red Foxes tied at 3-3, it was up to the No. 1 singles match between Dzulynsky and Marist’s Karlene Pang to determine a conference champion. Dzulynsky took the first set 6-0, but Pang followed up with a 6-4 win in the second to send the match to a third set. Dzulynsky won the final set 6-3 and capped off the Bobcats’ win.

Although the win cements the program’s ninth conference title, the women’s team has struggled in its previous NCAA Tournament appearances. The Bobcats have been swept on the road in the first round of the tournament in each of the last two seasons. Stanford beat Quinnipiac 4-0 in the 2014 tournament and North Carolina beat the team 4-0 last season. Yet, Young is ready for the team to change its fortunes as it faces national competition once again.

“I think how we go into our conference matchups is how we have to go into every match, expecting to win,” Young said.

While the women’s tennis team came from behind to earn a berth in the national tournament, the men’s team dropped a lead in its MAAC Championship appearance.

Quinnipiac then went up 3-0 on Monmouth as Kuwert and Rozenstein won their respective singles matches 6-3, 6-4.

“Especially in my last semester, I wasn’t playing for the results. I was just playing for myself,” Kuwert said. “That helped me a lot with relaxing on the court.”

Monmouth, who lost in the Men’s Championship Match in each of the last two seasons, then swept the remainder of the singles matches to claim the conference title.

Haraguchi and Zaretsky lost their matches in straight sets as Monmouth made the total 3-2. Przemyslaw Filipek dropped the first set to Quinnipiac’s Kei Ezaka, the MAAC Men’s Tennis Player of the Year, but won the second and third set to win the No. 1 singles match.

With a 3-3 score, the title came down to a match between Quinnipiac’s Luke Roser and Monmouth’s Christian Vieira. The two got it all the way to a third set tiebreaker. Vieira completed Monmouth’s comeback win by beating Roser 11-9 in the tiebreaker.

Although Kuwert is one of three seniors on the men’s team that will not have the chance to claim men’s tennis’ first MAAC Championship, he believes the team will be right in the thick of it next season.

“It hurts that we lost this close, but we had match points, which shows that we are capable and have a good chance of winning next year,” Kuwert said.