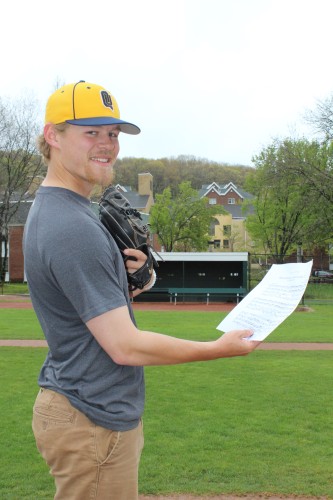 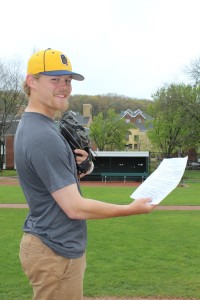 When first talking to London-born (sans English accent) freshman undecided liberal arts major, Andrew Workman, you would never guess his two wildly different passions. Workman is a pitcher on the Quinnipiac University men’s baseball team, but what most people don’t know is that he also plays the cello.

He moved to Thornwood, New York from London when he was 5 years old. As soon as Workman moved to the U.S. he fell in love with baseball. It was the sport that all the kids played when they were young, according to Workman. So he was just following suit when he ended up playing Little League.

“It was just what everyone did,” Workman said. “And I loved it.”

It was clear early on that Workman was different from everyone else on his team. His natural talent for the sport as well as his dedication and commitment stood out immediately and set him apart from the rest of his teammates, ultimately landing him a spot on a Division I team in college.

Baseball is not only a sport that Workman has passion for, but it has also changed his life off the field.

Since he is originally from England, a country which does not typically play baseball, his father did not know how to play the sport and therefore couldn’t teach his son on his own. Instead, he and his father learned the sport together and this ended up being a bonding experience for the two of them.

“He never really heard of baseball,” Workman said. “So, it was cool to bond like that.”

“You could sit down, for one reason,” Workman said, which was a contrast from baseball, where he was always on his feet.

In addition, Workman saw Yo-Yo Ma, a famous cellist, perform live once. Watching this performance solidified Workman’s appreciation for the cello and furthered his desire to learn how to play the instrument himself.

His interest in the instrument often comes off as shock to those who know him, including his teammates at Quinnipiac.

“It’s just one of those things; it’s kind of unexpected,” Workman said.

In order to prove his talent to his friends, Workman brought his cello to Quinnipiac and played for them.

“I was skeptical [when Andrew first told me he knows how to play the cello]. I pictured Andrew playing the cello in my head and started laughing,” Workman’s freshman friend and teammate Christian Nicolosi said. “I told him that he had to prove a lot of people wrong.”

Workman performed again at Quinnipiac, but this time for a much larger crowd.

In the recent event Bobcats on Broadway, which gave Quinnipiac athletes the opportunity to showcase their non-athletic talents, Workman was able to play for the school in a different way than usual.

“He’s probably loving the attention the cello has brought him here at school,” Nicolosi said. “But that’s a good thing because he deserves it.”

Although Workman has not become involved in any music organizations at Quinnipiac, he said he is interested in looking into the music options that are offered such as clubs and classes, since in the past he has both performed solos and taken private lessons. Workman said he misses the music scene. Whenever he performed in cello recitals in high school, he would meet all different kinds of people.

In high school, some of his fellow athletes were in the orchestra with him, however, he believes it was a good experience to grow up with different groups of friends.

“I mean I don’t know what other schools are like, but I am pretty sure, from what I have heard, that’s not really the case,” Workman said. “It was just so much fun and it made me enjoy and appreciate music.”

Workman stopped playing the cello regularly after his senior year of high school due to his desire to adjust to life at Quinnipiac.Workman wanted to explore Quinnipiac’s environment before declaring a major. However, he knew that this was the school for him.

“This was the only school I came to visit that I left saying, ‘I want to come here,’” Workman said. “For baseball reasons, academic reasons, the campus, the students, everything. Everything just drew me in.”

Workman is grateful that he stuck with the cello and baseball for such a long time and still possesses those talents. As for the future?

Workman plans to continue to pursue passions other than baseball.

“In the next few years, I definitely want to branch out more,” Workman said. “I think the cello would be a good way to do that.”