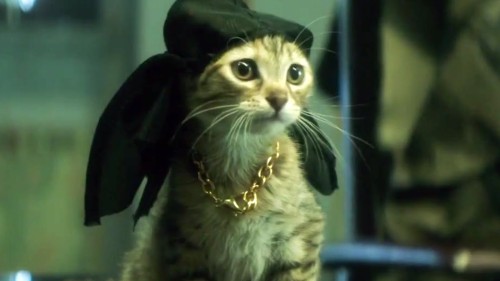 Keegan-Michael Key and Jordan Peele are everywhere. If you don’t know them from their hilarious show “Key and Peele,” you’ve probably seen them in guest spots on “Parks and Recreation,” “Fargo” or even with President Obama as his “anger translator.” Together, they have dominated television with their absurd humor, and for the most part, they’re able to sustain that humor in a feature length running time with their movie “Keanu.”

Key and Peele star as mild-mannered Clarence and Rell. After Rell’s kitten, Keanu, is stolen by a gang, they infiltrate that gang to get Keanu back. The majority of the jokes revolve around Clarence and Rell trying to convince the gang that they’re hardcore assassins. While that might sound repetitive, Key and Peele’s chemistry keep “Keanu” energized and fun. Seriously, the back and forth between these two is so impressive that this movie could not have worked with anyone else.

Having an adorable kitten running in the background of multiple shootouts is a strangely satisfying juxtaposition. After seeing this, I can only recommend that more kittens be placed in the background of action movies. The film is also improved by “Saturday Night Live’s” Will Forte, who plays Rell’s dreadlock sporting drug dealer. Forte’s character weaving in and out of trouble is one of the better subplots that leads to a great payoff. Other performances that deserve recognition are Anna Faris appearing as a crazy, drug induced version of herself and Method Man as the film’s main antagonist.

Chemistry, kittens, and cameos aside, the best part of this film is a recurring joke about singer George Michael. Clarence’s affection for the ’80s pop singer rubbing off on his fellow gang members often yields the funniest moments.

Unfortunately, it’s similarities to recent films “John Wick,” about a man getting his dog back from a gang, and “Dope,” about nerds having to sell drugs for a gang, keep “Keanu” from being memorable. “Keanu” may have homages to “John Wick,” given that Keanu Reeves stars in the latter, but there is a feeling while watching the movie that we’ve seen some of this before.

With any comedy, there are going to be some jokes that fall flat. There weren’t any duds, but there were the occasional awkward silences and missed opportunities. Luckily, Key and Peele’s energy distract from the fact that a few jokes didn’t land. The quick pacing also helps in keeping the audience interested.

“Keanu” is an enjoyable action comedy from the incredibly talented Key and Peele that hopefully is the first of many more movies to come. And if anything, this should give you an excuse to look up their outrageous sketches on YouTube.