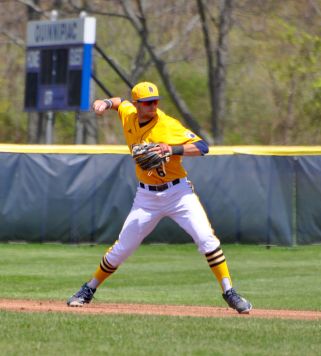 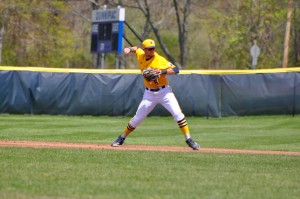 In the first game of the day and second game of the series, junior captain Matthew Batten homered twice while junior infielder Joe Burns hammered a long ball of his own. Despite the powerful efforts from the two bats, the Bobcats’ three errors in the field and lack of consistent pitching resulted in a 5-3 loss.

“You lose [game two] by giving it to them and then the momentum is in their hands, knowing they already won the series,” Quinnipiac head coach John Delaney said. “They’ve got their best pitcher on the mound in game three and we’re down 0-2, so it makes it a different game in game three when you lose a game like we did in game two.”

Monmouth’s momentum from its previous win was put on display early on in the final game of the series as the Hawks scored two runs in the second inning.

An error from Pescitelli and a hit by pitch from junior pitcher Alex Vargas ultimately put the Bobcats in a 3-0 hole in the top of the fourth. After a quiet few innings, Monmouth infielder Justin Trochiano increased the Hawks’ lead to 5-0 on a single to center field that drove in two runners.

Although the Bobcats were down, in the bottom of the eighth, Moskey started the inning off with a big double to left field. Batten hit a flyball in the following at bat to advance the runner to third, then Pescitelli found redemption with a sacrifice fly of his own to drive Moskey in and break Hawks pitcher Anthony Ciavarella’s shutout bid.

Ciavarella pitched through eight innings, totaling four strikeouts, one earned run and just four hits against on the mound for Monmouth in this game.

“Their pitchers did a great job of keeping us off balance,” Delaney said. “They gave up a hit and then they executed their next pitches to get guys out which eliminated our production, so it was hard today.”

Next up, the Bobcats face a non-conference opponent in Bryant in Smithfield, Rhode Island on Thursday in hopes of improving their overall record and preparing for future MAAC competition.

“We use the mid-week games to get ready for the weekend but want to keep the same intensity, so the approach doesn’t change at all,” Batten said. “We just work on some things differently but go out planning to win.”