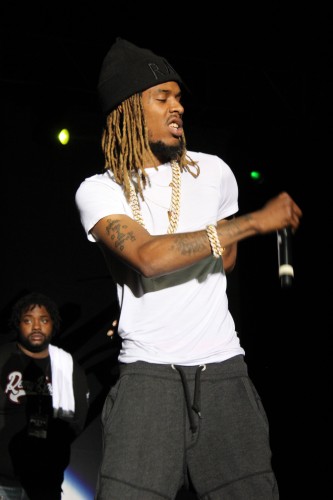 Fetty Wap headlined this years Wake the Giant spring concert hosted by The Student Programming Board.

Students lined up outside TD Bank Sports Center long before the doors opened at 6:15 p.m. Opener William Singe performed before Fetty Wap’s DJ and Remy Boyz took the stage. Around 8:30 p.m., Fetty Wap made his appearance and performed his hit songs such as “Trap Queen,” “679,” and “My Way.”

Fetty Wap was in a motorcycle accident during the summer of 2015, according to Associate Director of Campus life and Student Programming Board Advisor Stefano Fasulo.  As a result of not feeling well, he did not show up for his performance at SUNY Brockport, according to WHEC Rochester. This left Quinnipiac students questioning whether or not he would perform at the Wake the Giant concert.

Freshman Mary Lively is one student in particular who questioned Fetty Wap’s attendance.

“For the most part I had fun but I was a little skeptical when he didn’t come on stage right away, because he skipped his last event.”

Fasulo said Fetty Wap did arrive late and missed his mic check. However, upon Fetty Wap’s arrival his team checked the equipment and everything was deemed satisfactory for the performance.

The overall show received mixed reviews based on the performance.

“I thought it was good,” Emanuilidis said. “I was expecting less because people said that he only sings like two songs, so he was okay. But the opening acts were horrible. They were so bad. He only sang like four songs that everybody knows.”

Freshman Mackenzie Campbell follows Emanuilidis’s sentiment in that she didn’t enjoy the show at all.

“I personally don’t even think he’s a good rapper,” Campbell said. “He was not good live. I think that the only good thing about it was that he threw one hundred dollar bills into the audience, but I didn’t benefit from it because I was in a seat. I was not happy with it and I didn’t enjoy it.”

Sophomore Tyler Vaillette had a more neutral approach but still wasn’t happy with the amount of time Fetty Wap was on stage.

“I did not think it [the concert] was all that great, but it wasn’t bad. I was unhappy with his short set and mediocre performance,” said Vaillette.

Several students speculated Fetty Wap’s actual performance on stage only lasted close to 30 minutes and therefore thought his compensation would reflect a breach of contract.

Lively said she believes Fetty Wap’s short performance should be reflected in his compensation for the performance.

“The fact that he didn’t perform for very long after he kind of screwed a lot of schools over pisses me off,” Lively said. “I think that it would be a really good idea for them to give Fetty Wap a portion [of his pay]. Maybe not even half because he came on for half an hour and it’s not like he necessarily needs the money, he’s a millionaire.”

“Unfortunately, that’s misinformation and [Fetty Wap] has been compensated,” Fasulo said. “At the end of the day they fulfilled all contractual agreements… We agreed upon a minimum of 50 minutes. And so when we tie in his DJ plus the time he was on stage, which was close to 40 [minutes], he went over 50 minutes.”

After reflecting on the event, freshman Cassandra Krebs said that the concert wasn’t worth the money she spent on tickets.

“I just don’t think he was worth the $25 dollars I paid per ticket,” Krebs said. “I paid for four of them for $100 because it was my birthday and my sister came and so did some of my other friends. So I just dropped a lot of money for a half hour which is ridiculous.”

CORRECTION: This article was updated at 7:12 p.m. from the print edition published on April 27.

The original article said Fetty Wap was in a motorcycle accident the night before the concert, but the accident occurred in summer 2015.

Information provided by Associate Director of Campus Life Stefano Fasulo was removed because members of The Student Programming Board said it did not accurately reflect the events of that evening.