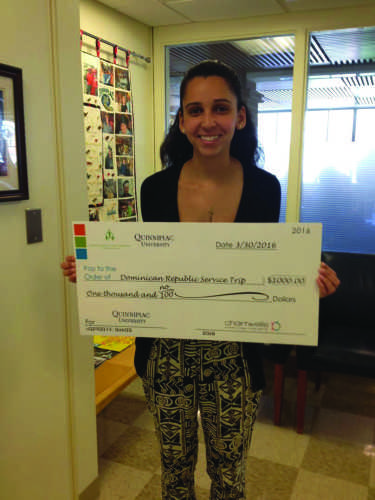 Senior Lindsey Banks holds the $1,000 check for the QU301 Dominican Republic service trip. The money will be used to build a cafeteria in the neighborhood where students volunteer during their time abroad.

Chartwells recently donated $1,000 to the QU 301 program on March 30, 2016. The program is a class that sends students to other parts of the world for charitable work during school breaks.

A total of $2,000 was then  set aside for building a cafeteria in the Kilometer 6 barrio, the neighborhood in the Dominican Republic where students volunteer, according to Professor John Powers, who is in charge of the program.

The money that Chartwells gave was won as prize money, according to Director of Dining Services Leean Spalding. Their parent company, Compass Group, holds a competition annually amongst each branch, considering their community service efforts through donated product and labor. The winner has the discretion to give that money to whatever group they want.

Spalding would like for Quinnipiac to think of Chartwells as more than just the people who run food services.

For Powers, the donation was an interesting surprise. Powers said one of his students from the fall, senior Lindsey Banks, wanted to start planning for future trips. Banks went to Chartwells to start talking about ways to help QU 301, and then she gave him the call about the donation.

“It was out of the blue.… We were really trying to figure out if there was any way we could get involved with Chartwells,” Powers said.

The church group was tasked with building a hospital. At first, Powers was not impressed.

“There were a couple of holes in the ground. This was going to be a hospital,” he said. “I thought that this was the biggest waste of time in my life.”

However, as more groups ranging from rotary clubs to businesses came to the area, the hospital began to take shape. Now, according to Powers, El Buen Samaritano Hospital stands four stories tall with 450 workers treating 50,000 people per year.

Powers said being on the ground is a different experience to the classroom portion. Senior Gianna Costantino would agree with this. She went on the QU301 trip during her junior year. Like Powers, she had experience with community service trips before taking QU301. One of the things she liked seeing was the reactions of her classmates who were doing service trips for the first time.

“It was [a] very emotionally involved trip, and I think it brought everyone closer to go through something like this,” Costantino said.

Some of the memories Costantino had from the trip included helping a disabled man and building a house. She thinks that it is important for Quinnipiac students to serve those in need.

“We’re very privileged here, so we have all the resources to give back. It’s [just] a matter of dedicating your time,“ she said.

Through the dedication of those who have been on the trip, Powers feels like Quinnipiac has been able to have a lasting impact on the world.

Despite the recognition, Powers feels that giving back is the most important thing.

“People in the middle of those sugar cane villages aren’t going to donate to Quinnipiac or send their kids to Quinnipiac, but it’s just part of the effort. It shows that the heart of the university and the heart of Chartwells, in this case, is in the right place,” he said.