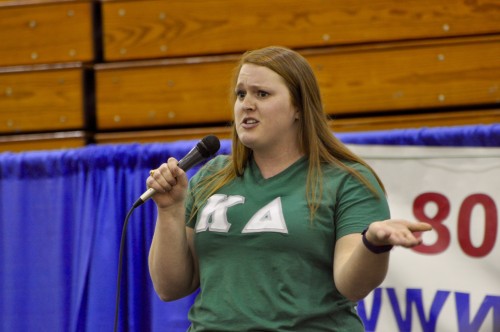 Fraternity Beta Theta Pi proved once again that their drive to help can be done through the power of comedy. Beta Theta Pi hosted their second annual “Stand Up Against Cancer” event on April 21 to raise money for the American Cancer Society (ACS). Exactly $3,300 was raised, and the money donated went towards ACS’s cancer research as well as helping them discover new ways to prevent the disease and continuing their programs.

Junior and President of Beta Theta Pi Andrew Croteau said the stand up event was created in order to give students an outlet to release their quick-wit creativity while contributing to the fight against cancer.

“Mostly everyone somehow is either directly or indirectly connected with this disease,” he said. “Stand up, although a humorous event, gives those affected by this serious disease a place to escape for a couple hours.”

Junior and philanthropy chairman of Beta Theta Pi, Ben Handwerger, was a major component to organizing the event.

“I just want to bring it to the next level, get more people involved, get more organizations involved, to make it more of a community Quinnipiac event as opposed to a Beta philanthropy event,” Handwerger said.

There were 12 students who got up on stage and made jokes about topics such as their family life, most embarrassing moments and wildest experiences while on campus.

There were multiple raffles that offered prizes including a Dunkin Donuts gift card, a Starbucks gift card and a floor seat ticket for the Wake the Giant Spring Concert.

Freshman and Beta Theta Pi member Zach Leichter volunteered at the event by collecting the money for the raffles.

“We started off the day with nothing in the raffles, and [then] we probably got like 50 names per raffle. A lot of people were willing to give a dollar or two,” he said. “It was nice to see people come out; even if people weren’t going to show up, they still wanted to donate so that was nice to see.”

Sophomore Beta Theta Pi sweetheart, Alexa Zeoli, was glad to see the members of Beta Theta Pi put on such an engaging event for a good cause.

“I am extremely proud of the boys for raising the amount of money that they did. I can’t wait for next year,” she said. ”Every contestant was hilarious, and I was really impressed [by] how many people have the confidence to get up on stage and make people laugh for 10 minutes.”

After all of the comedy acts, a panel of judges announced the top three winners of the stand up.

Filardi attended Beta’s philanthropy event last year, but it wasn’t until this year that she decided to participate.

“Beta Theta Pi’s Stand Up Against Cancer philanthropy event is not only very unique, but also always proves to be a great time,” she said. “Last year, I enjoyed hanging out and laughing in the crowd, but after some of my sisters encouraged me to tell a family story that they heard me tell once before, I found myself this year taking a shot at the actual stand up.”

Filardi was initially nervous to go on stage. However, as she addressed her story, she progressively grew more comfortable in expressing herself to the crowd and was genuinely surprised that her story managed to help her win the comedy show.

“When they were ready to announce the winners I really didn’t think I won,” she said. “I was just happy that I stepped outside my comfort zone and tried something that I’ve always enjoyed.”