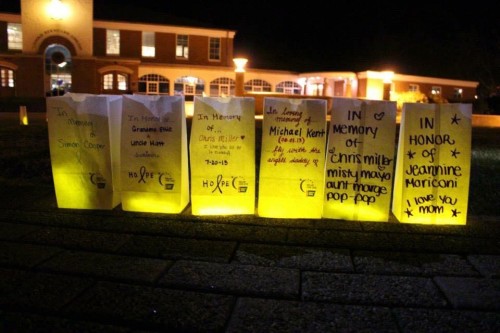 This year’s Quinnipiac’s Relay for Life will take place in September. Participants line the Quad with bags commemorating their loved ones.

Quinnipiac’s Relay for Life hosted events during the week of April 18-22 as a part of their “Paint the Campus Purple” week.

Throughout the year Quinnipiac’s Relay for Life works to raise money for the Relay for Life event which will take place on Sept. 10, according to Special Event Chair, Lynn Aureli. All the proceeds go directly to the American Cancer Society.

The committee campaigned all week to get the word out about Relay for Life and to get students to participate in events. Events included tabling, a pancake breakfast and a Panera fundraiser.

Teams for next semester’s Relay for Life event can be made online through the American Cancer Society’s website .

“We have a decent amount of teams right now, but we are looking for as many teams as possible. [A team] can be just a group of friends, or an organization or a fraternity or sorority, so any group of people or you can also just register as an individual; a lot of people do that too,” Aureli said.

Pereira has been a part of the committee since her freshman year and was appointed head chair this past year.

“The purpose of Relay for Life is to bring awareness and remember those lives that beat cancer, are currently battling or loved ones that we lost to cancer,” Pereira said.

According to Pereira, the luminaria ceremony is the biggest aspect of Relay’s “Paint the Campus Purple” week.

“It was actually really great; I believe we had probably about 50 people which is really awesome for such a small scale type event,” Pereira said. “In the years past we haven’t had as many so that fact that we had this many this year I’m really excited.”

Sophomore Alexandra Clarke is the daughter of a survivor and attended a luminaria ceremony, an event held to honor people who had, have and or passed away from cancer, for the first time on April 21.

“My mom is a survivor and I lost two of my grandparents from cancer so I thought that it would be really interesting [to attend] considering I did the Relay in the fall,” Clarke said.

Clarke was able to connect with the speaker at the ceremony having gone through the same situation of having a parent battling cancer.

“It wasn’t the same time of my life but I knew what she was going through,” Clarke said. “She talked about how her mom started looking at her bucket list and that made it really surreal for me because my mom started that for a second and she realized that you can’t look at life that way.”

Pereira puts into words what it means to be a part of an organization like Relay for Life after working to benefit so many people.

“Relay for Life means being able to be a part of something that’s bigger than us as individuals,” she said. “To be such a small part in such an amazing ripple effect, you can’t explain it; it’s like nothing else. You’re one person and you as one person can make such a big difference and that’s incredible. It’s so amazing I can’t even explain it.”