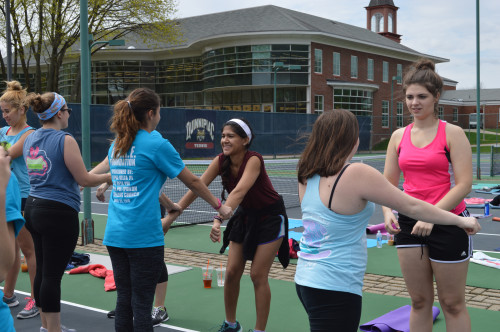 Participants of the T.A.K.E. workshop partnered up and learned self-defense techniques

The tennis courts were filled with a sea of women this past Saturday, April 23.

The program began in 2004 and is a legacy program of Ali Kemp, who was murdered by a man while working at her neighborhood swimming pool in 2002, according to the professional instructor of the class, Jill Leiker.

Leiker works under the foundation and travels with her husband, Bob Leiker, teaching self-defense to women.

Kemp’s parents wanted to start a self-defense class in the wake of their daughter’s death. Since Kemp was a Pi Beta Phi and her mother, an Alpha Delta Pi and father, a Sigma Phi Epsilon, the two sororities and one fraternity sponsored this T.A.K.E Defense Foundation event. The class was open to all women of Quinnipiac.

Although T.A.K.E travels to teach collegiate students, there have been students of varying ages, according to Leiker. The youngest student was 12 years old and the oldest was 90. Therefore, it can be seen as a self-defense class for all women.
Quinnipiac has been a part of T.A.K.E’s national university tour for about six to seven years, according to Leiker

Bartolomei booked the event specifically for Sexual Assault Awareness month because she thought it would be a good program to have during this month.

This is the fourth year that the sorority has sponsored it, according to Bartolomei. In the past, it has been sponsored by other organizations.

Leiker said she hopes women never have to use the combat skills that are taught, but the educational aspect is important.

“Our hardest job is to always convince people it can happen to them,” Leiker said. “People always think that it happens to somebody else.”

Leiker ingrained into the participants that when attacked, the four areas they should aim for are the eyes, nose, throat and groin.

“What you do in T.A.K.E. is you kind of partner up and you learn and practice self-defense techniques on each other,” senior ADPi Caroline Arzt said.

Arzt said this class not only helps a woman learn how to protect herself, but to also be able to help another woman out, who may be getting attacked.

The takeaway Arzt got from T.A.K.E. is that girls should avoid freezing and forgetting everything when they find themselves being attacked. According to her, a woman should do as much as she can get out of the situation.

Arzt added that all women should try to take a self-defense class, and that T.A.K.E. teaches women to yell “no” at the person because most of the time, attackers will run away after hearing this.

Another aspect that was emphasized greatly was maximizing the power that is in your body.
Christy Dzubay, a sophomore and a sister of Pi Phi, did not know if she was capable of self defense because she is small and not strong. But afterwards, she realized that the whole premise of the workshop is that any girl can do anything in the moment, if need be.

Another aspect that Dzubay found helpful is that it reminded the girls of the sad reality of sex offenders, but that women should not live in fear.

“Even if you think these things won’t happen to you, they can,” Dzubay said. “It’s important to be prepared because it could be the difference between life and death.”

Bartolomei agrees with this mindset of knowing what to do and not being scared to do it.

“You are in control of the situation and you have the power to fight back,” Bartolomei said. “You shouldn’t think that you are defenseless. Because if you have a voice, then you can fight.”

To further stimulate this idea, there were t-shirts at the event that read: “Fight like a girl.”

Bartolomei loves the slogan because people say phrases, such as “act like a girl,” in a negative manner. However, “fight like a girl” can be seen as fight back as hard as you can in order to take your power back.

“If Ali [Kemp] had known this type of defense, then maybe she would still be here,” Bartolomei said. “We have this knowledge in our minds and in our bodies, and hopefully we will not be the victim next time; we will be the success story.”