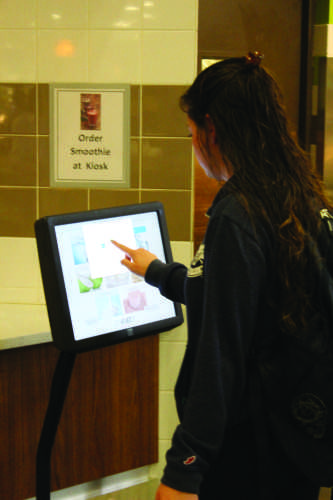 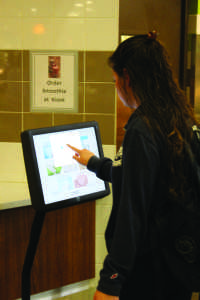 The all-day smoothie line in the cafe was the best thing to ever happen to me. I am a picky eater and also a vegetarian, so seeing a station that incorporated fresh fruit made me very happy. Since the smoothie line arrived on main campus, I’ve gotten a smoothie every morning after class. I’ve waited far too long than any person should for a smoothie, but it was all worth it.

Well, that is, until the recent changes you implemented. Now BYOB is not the only station in the cafe with a kiosk to order. The smoothie station has one too, and personally, I hate it. I figure this kiosk was put there to make ordering smoothies easier, but let me tell you, that is not the case. Upon ordering a smoothie from the kiosk, students wait around the station. When they realized they have been waiting too long they leave, but THEIR SMOOTHIE GETS MADE ANYWAY. What a waste of fruit and time for the people making these smoothies.

But that’s not all, this smoothie kiosk removed the interaction between me and the person who makes my smoothie. All of the thank yous, small talk and jokes are gone. The kiosk was out of order last week, but now it’s back and no better than before. Students’ orders have been doubled, even tripled because of this stupid computer leaving the people making the smoothies confused with multiple of the same order.

Also on another note, please use real frozen strawberries and not this syrupy strawberry garbage that you used on Monday morning. Syrupy fruit is not to be used in smoothies; it’s to be used on french toast.