May weekend: A history

As the school year winds down and the weather gets warmer, many students are looking forward to celebrating their academic successes and spending time with friends.

For many years, May weekend allowed students to wind down and celebrate before finals week. During the last weekend of April, students could gather on the Quad where there would be food trucks, concerts and other events.

But on May 7, 2007, the university brought an end to this Quinnipiac tradition.

“It just didn’t have its real meaning anymore to the students,” he said. “As we moved along, what happened after dark was the big thing.”

May weekends in the past were planned by the Student Programming Board, which was once called the Social Programming Board. According to the April 3, 1967 issue of The Quinnipiac Chronicle, Friday classes would be cancelled leading up to May weekend. There would be talent shows, a picnic at Holiday Hill in Cheshire and a formal event at night. Students had to pay to participate in May weekend and could drink alcohol freely across campus.

In order to accommodate the change of the legal drinking age, the university created new procedures and rules for students to follow during May weekend, according to the May 12, 1983 issue of The Quinnipiac Chronicle. The university created separate areas during their annual picnic: one for drinkers and one for non-drinkers.

Though the weekend allowed students to relax prior to finals week and commencement, Barger said students forgot what May weekend was about long before he started in 2000.

“May weekend really started to miss its mark as to what it was supposed to have been, and it started to move further and further away [from that idea],” Barger said.

As students forgot the true meaning of May weekend, they began to feed into what Barger referred to as the “urban legend” of May weekend. Even when the weekend was still sponsored by the university, alcohol was and continues to be what students think May weekend is all about.

Barger said in one of the earlier May weekends he worked, there were 72 arrests involving Quinnipiac students and their visitors.

“We don’t have 72 arrests in a year…but yet we get them all in one weekend?” he said. “How do you come to terms with that?”

Alcohol-related arrests were not the only thing that started to take a toll on the university. According to Barger, several students were killed throughout the years on this particular weekend.

In 2007, a female student was crossing Whitney Avenue from Krauszer’s convenience store to Andale’s bar. After the student was struck and killed by a car, administration sat down with President John Lahey to reevaluate May weekend’s purpose.

“We had students being very intoxicated to the point where they had to be transported. We had vandalism that was far above and beyond any vandalism we had at any other time in the year,” Barger said. “Coupled with the deaths that we had…we had to look out for the welfare of the students.”

In an email sent in 2007 by former Senior Vice President for Academic and Student Affairs Kathleen McCourt, the Quinnipiac tradition was shut down. May weekend was no longer going to be sponsored by the university.

“Unfortunately, as we saw again this year, May weekend has become an event where many students consume excessive amounts of alcohol and behave in ways that place their own safety and the safety of others at risk,” McCourt said in the email. “Throughout the weekend, there were students who exhibited a lack of respect for other members of the university community, including staff and security, by serious and repeated violations of university policies.”

McCourt explained these problems included arrests for breach of peace, injuries, the illegal use of alcohol, accusations of sexual assault and incidents of vandalism.

“As a consequence, a number of students may not be continuing their studies at Quinnipiac,” she said. “It has become apparent that the behavior exhibited during May weekend is inconsistent with our core values and literally puts students and staff at risk.” 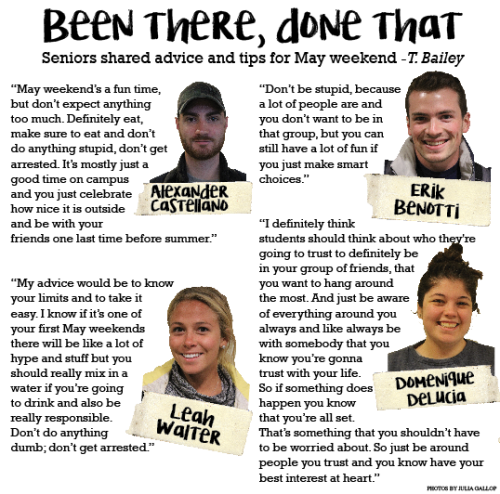 The future of May weekend

Even though May weekend is no longer recognized by the university, administration still makes an effort to make sure students are behaving responsibly during this time of the year.

Vice President and Dean of Students Monique Drucker sent an email to all undergraduates on April 21 reminding students of appropriate behavior as the warm weather approaches.

“This nicer weather, along with the approaching end of the school year, has put us all in a celebratory frame of mind,” Drucker said in the email. “Please keep in mind that, whether you are on or off campus, in the residence halls, the classroom or at social events, the Student Code of Conduct remains a behavioral expectation.”

Chief of Public Safety Edgar Rodriguez did not respond in time for publication about Public Safety’s plans for this year’s May weekend.

For Vice President of the Student Government Association (SGA) Carly Hviding, May weekend is one last “hoorah” before finals week.

“The university stopped recognizing May weekend and on-campus programming that weekend nine years ago, but the students continue to use the last weekend in April as a weekend to have parties,” Hviding said.

Hviding said the good intentions of May weekend were lost when students began to get out of control and destructive.

“My impression is that the university isn’t opposed to the students celebrating a year of hard work and enjoying the weather, but some of the behavior gets out of control and puts the students in unsafe situations,” she said.

At this point in time, the university does not have plans to sponsor programming on May weekend, according to Associate Vice President for Public Relations John Morgan.

But Hviding said SGA is making a case to administrators to have May weekend recognized by the university once again.

“The university is caught in a tough place between not recognizing it as an official event but also having to take preventative measures to keep students safe,” she said. “SGA has had meetings and has worked on a proposal to get some on campus programming for that weekend in the future to see if it curbs some of the student behavior and can serve as a more fun, safer, celebratory outlet for the students.”

SGA is currently looking at student behavior and campus culture to see how it plays into decisions made about May weekend, according to Hviding.

“Right now, on an average weekend, we have hallways in Commons being destroyed and students being arrested in New Haven,” she said. “If you pair already unsafe and destructive behavior with a weekend infamous for students being out of control, you can see where the university’s concern comes from.”

As of right now, SGA’s proposal has not been approved.

“SGA is still in the process of meeting with administrators and trying to look at the cause of the original ban and also overall student behavior,” Hviding said. “It won’t be recognized if it’s going to put students at risk.”

Hviding said SGA is trying to compromise with the university by changing May weekend to some form of recognized spring weekend.