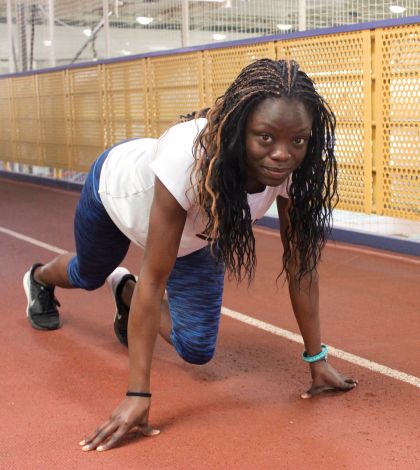 Nearing the end of her career as a Bobcat, senior Shameal Samuels has proven to be one of the greatest track athletes Quinnipiac has ever seen.

Honored as the 2014-15 Quinnipiac Female Athlete of the Year, Samuels said she has always had a passion for running. 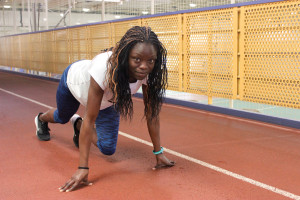 “When I was younger we didn’t really have sports in my school, so my friends and I would run around and just race each other for fun,” Samuels said. “I tried cross country for a few years, but it wasn’t until my sophomore year of high school that I really wanted to run seriously.”

Born in Jamaica and raised in Hartford, Samuels was an underrated and overshadowed recruit for Quinnipiac head coach Carolyn Martin. While attending Capital Preparatory Magnet School in Hartford, Samuels ran on some exceptional indoor and outdoor track teams, but was notable for her remarkable individual performances and accolades.

As a freshman at Quinnipiac, Samuels instantly established herself as one of the Bobcats’ most dynamic and versatile runners. By the end of the season, Samuels had broken the school record four times in the 400m, with her fastest time being 56 seconds at the ECAC Championships.

Samuels’ sense of concentration and dedication showed through her performance on the track as she was quickly becoming one of the program’s strongest runners.

“She’s certainly a different breed than any of the great athletes we’ve had here in the past,” Martin said. “Shameal is simply a great example of what hard work can do.”

“When she first came here, she really got her head straight,” Pisciotta said. “Every year she’s been here, she’s dropped over a second in her race time, which makes a huge difference. The fact that she has come so close to U.S. Olympic trials level is absolutely impressive.”

Samuels’ sophomore season is considered to be one of the most impressive single seasons in Quinnipiac women’s track history. That spring, she became Quinnipiac’s first individual champion with a first-place finish and program-record time in the 400m dash in the MAAC Championships.

In Samuels’ legendary sophomore campaign, she broke program records on nine of her 19 total events throughout 2013-14. Breaking records is something Samuels quickly became accustomed to in her athletic career.

“I think Shameal was a huge turning stone for our program,” Martin said. “She has absolutely put us on the map in regards to sprints and jumps at Quinnipiac. Before her, we were formally known as a very strong distance program, but now we have proven to have some high level sprinters thanks to Shameal.”

Martin, a three-time Coach of the Year in the Northeast Conference, credits Samuels’ hard work and dedication both on and off the course to transforming Quinnipiac’s successful indoor and outdoor track program into what it is today.

“I just love her humble personality and the way she has handled all of the attention,” Martin said. “To put it simply, she’s got all of the qualities a coach could ask for.”

By her junior year, Samuels was becoming a positive leader and role model on the team and was making a name for herself amongst the top NCAA runners in the country. Her historic 2014-15 season, which will go down as one of the best single seasons in program history, was comprised of 16 top-ten and 13 top-five finishes.

Samuels dominated the MAAC Championships during her junior campaign and was named the 2015 MAAC Women’s Track Most Outstanding Performer. Her three first place finishes qualified Samuels to advance to the NCAA East Regionals, becoming just the second Bobcat to advance to an NCAA Regional event since Katie Gwyther.

At the New England Championships, Samuels placed first in the preliminaries and captured her second straight 400m title with a time of 53.72 seconds, breaking a 27-year-old meet record. Samuels ended her junior indoor track season placing third overall in the 400m at the ECAC Championships with a time of 54.31 seconds in the finals. A two-time MAAC and New England 400m Champion as a junior, Samuels was named the 2014-15 Quinnipiac Female Athlete of the Year.

Coming into her senior indoor track season, Samuels still had high expectations for not only herself, but also her team.

“I wanted to have a much better season than I did last year because I know there’s always room to improve,” Samuels said. “I’ve pushed myself through so many limits that I didn’t know I could reach and couldn’t have done it without the support of my teammates and coaches.”

After graduation, Samuels says she will continue to run and has plenty of confidence in the program she has made a name for.

“I have no doubt that the program is in good hands,” Samuels said. “Everybody seems really motivated and they’re all running so much better than they were in the beginning of the season, so I’m not worried.”

Shamael Samuels, who earned her first Women’s Track Athlete of the Week earlier this month, will compete in the MAAC and ECAC Championships this May, hoping to add more record-breaking performances to her already heavily-decorated resume.