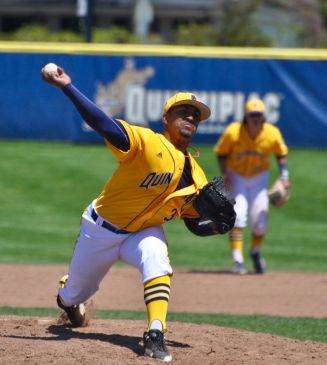 The Quinnipiac baseball team (16-22, 6-6 MAAC) picked up a weekend series win over the Manhattan Jaspers (12-24, 4-8 MAAC) with a 10-4 victory on Sunday. The Bobcats hosted the three game series in Hamden, winning game one of the doubleheader on Saturday by a score of 5-3, but losing game two by a score of 17-11. 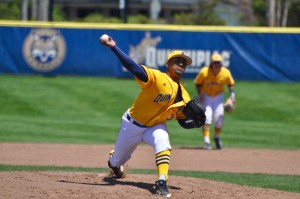 Delaney was happy to see “the resilience in the club” to win game three.

He was quick to credit Quinnipiac starting pitcher Alex Vargas for his performance on the mound.

“We had a big outing by [Vargas] which was good to see,” Delaney said.

Although Manhattan scored three runs while he was on the mound, the Jaspers did not score any earned runs off him.

Delaney says he has seen Vargas improve his game.

“[Vargas] had his struggles earlier in the season,” Delaney said. “Today the biggest difference was that he was throwing strikes. They fouled a lot of pitches off which got to his pitch count but he was in the zone throwing strikes which gave us a chance.”

According to Delaney, “[Vargas] throws hard enough with his velocity that he’s going to get enough outs for us.”

The Bobcats scored 10 runs on 13 hits while Manhattan only generated four runs on seven hits.

Brian Moskey scored two runs on two hits with three RBIs in three at bats. His three-run triple in the bottom of the fourth inning gave the Bobcats a 7-3 lead.

Delaney considered Moskey’s triple to be “the game changer.”

“It kind of cracked the game open,” Delaney said. “He’s been swinging the bat well and he’s been a big part of getting this offense going.”

In Moskey’s eyes, the key to the Bobcats’ offense was “to keep it simple” at the plate and he was quick to credit his teammates for his successful performance.

“If it wasn’t for them I would have a triple that means nothing and a few hits that mean nothing as well… It’s a team thing,” Moskey said. “We just have to keep getting [on base] for everyone else and keep driving each other in as a team.”

Junior captain Matthew Batten also agreed that “it was one through nine” that generated the offense for the Bobcats on Sunday.

Batten was another standout for the Bobcats in game three of the series. In four at bats, he knocked in two RBIs on a team-leading three hits. Yet, he gave high praise to his team’s pitching performance.

“[Vargas] looked awesome,” Batten said. “It was the best we’ve seen him, and Robbie Hitt came in and shut the door.”

Hitt took over for Vargas to start the sixth inning. Across four innings, he gave up one earned run on four hits while striking out four batters on zero walks.

“[Hitt] did great,” Delaney said. “The kid’s coming out of the pen recently and he’s done exceptionally well. Today we needed to extend him a little bit because we used so many guys yesterday that he had to step up.”

“[Hitt] was throwing strikes and he kept them off balance and he got ahead in the count and that was the biggest thing,” Delaney said. “Once he’s ahead in the count, he can use those off-speed pitches and pitch to his strengths.”

Sunday’s victory puts the Bobcats a half game above Niagara for sixth place in the MAAC standings. The top six teams in the MAAC qualify for the conference tournament.

“Today was huge for us,” Batten said. “[Because of] the way we started conference play we need to win every series from here on out… that was a big win for us.”

As Batten put it, “every game is a playoff game now,” for the Bobcats.

Following non conference games on Tuesday against Hartford and Wednesday against Massachusetts, the Bobcats will host a three game series over the weekend against Monmouth.