Baseball takes one game in doubleheader against Manhattan 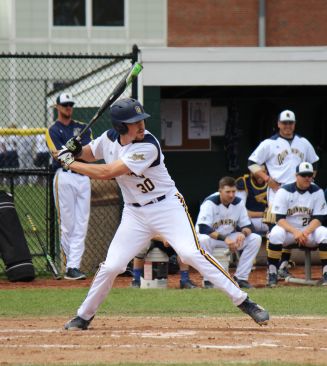 The Quinnipiac baseball team split a matinee doubleheader with Manhattan on Saturday afternoon at the Quinnipiac Baseball Field, holding onto a win in the first game but unable to combat the number of runs they faced in the second game.

“It was a hard fought battle back and forth,” Quinnipiac rightfielder Rob Pescitelli, who had a home run in the first game, said. 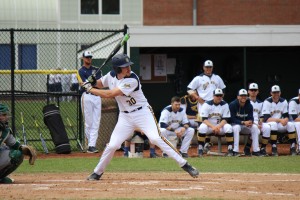 Quinnipiac got down on the scoreboard first in the opening game, trailing 2-0 after the second inning.

That score remained until Bobcat third basemen Joe Burns belted an RBI double to cut the Manhattan lead in half.

With two outs in the fifth inning, Pescitelli homered with a man on to put the Bobcats up 3-2, their first lead of the game.

“Late in games, when we get down one or two runs it’s not the end of the world for us,” Pescitelli said.

The Jaspers came back to tie the game at 3-3 early in the seventh inning, but a couple of errors on their part caused them to forfeit two more unearned runs to the Bobcats in the bottom half of that inning.

The final score for the first game held at 5-3, with the Bobcats securing the victory.

The second game of the day began with rocky pitching from Quinnipiac’s Taylor Luciani, who allowed three runs in the first inning.

Quinnipiac responded in the bottom half of the first inning, but with only one run, making the score 3-1 going into the second inning.

Luciani got on track in the next inning, who put the Jaspers down 1-2-3 in the top half of the second.

The bats really got going for the Bobcats in the bottom half of the second, as Brian Moskey roped a two-run single accompanied by a two-run double from Matthew Batten to make the score 5-3 Quinnipiac.

Quinnipiac head coach John Delaney alluded to the onslaught that would come for the Bobcats later in the game.

“The late-inning comebacks have always been there,” Delaney said. “It’s a matter of just keeping the games within reach.”

Quinnipiac made their first of five pitching changes to begin the fifth inning and Manhattan tied the game at 5-5.

The Bobcats answered quickly, as Julius Saporito blasted an RBI double in the bottom of the fifth to make the score 6-5 in favor of Quinnipiac.

Following this lead change, Quinnipiac did not have the lead again and things turned in a hurry.

After Quinnipiac pitcher Justin Thomas recorded the first two outs of the inning, an error in left field led to a Manhattan triple. From this point, the Jaspers scored seven runs as they went through another Quinnipiac pitcher, ending the top of the sixth with a 12-6 lead over the Bobcats.

“You have to put guys out there that can throw strikes and get outs, simple as that” Delaney said. “I don’t really care how many guys we have to roll through.”

A sign of hope flashed for the Bobcats in the bottom of the sixth, as catcher Lou Iannotti hit a two-run home run to cut the score to 12-8.

To start the seventh and final inning of this double header, Quinnipiac pitcher Wyatt Hamilton hit two batters in a row and the Jaspers tacked on another five runs in the inning to make their lead 17-8.

“The offense is going to be there and the bullpen has just got to keep us in games” Pescitelli said.

The Bobcats rallied to score three more runs in the bottom of the seventh, but they lost by a final score of 17-11.

This win and loss brings Quinnipiac to 15-21 overall on the season and 5-5 in the MAAC and they will finish their home stand against Manhattan tomorrow at noon.

“Come back tomorrow, win a game, win a series and keep climbing in the standings in the MAAC,” Pescitelli said.