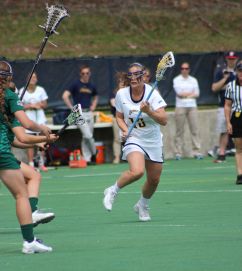 Quinnipiac’s women’s lacrosse team won its first game since March 12 and its first conference game of the season in a 12-8 win over Manhattan on Saturday afternoon at the QU Field Hockey/Lacrosse Field. 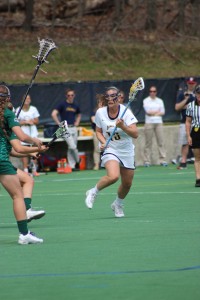 Quinnipiac (3-13, 1-7 MAAC) honored seven members of the class of 2016 prior to the Senior Day game. DeVito, Aileen Carey, Shana Maglio, Rachel Massicotte, Sara McCullough, Trinity Scanlon and Leah Walter trotted onto the QU Field Hockey/Lacrosse Field for the last time with their families before taking on the Jaspers (4-12, 0-6 MAAC).

“It’s awesome. We’ve worked so hard for four years, all the seniors together,” DeVito said. “Now I know how it feels winning on this day. It makes everything worth it.”

The Bobcats pounced on the board first as Allison Kuhn forced a turnover and fed an open DeVito for the goal.

Stefanie Ranagan countered for the Jaspers just two minutes later, but the Bobcats separated themselves over the rest of the half.

DeVito assisted on Quinnipiac’s next three goals as Carey, Maglio and Kuhn scored to give Quinnipiac the 4-1 lead.

Loren Antonacci assisted Carey and Kuhn on Quinnipiac’s next two goals as the team built a 6-1 lead with 8:30 left in the first half.

After Megan Yarusso scored an unassisted goal for Manhattan, Antonacci scored a goal of her own before assisting Kuhn again as Quinnipiac took a 8-2 lead. Manhattan got one more goal from Claire Roediger to make it an 8-3 game going into halftime.

“In the first half, we moved the ball really nice,” Quinnipiac interim head coach Brittany Fortunato said. “We were able to find our teammates. We did a good job making our teammates look good,”

Ranagan opened the second half with two unassisted goals in the first 2:34 of the half.

Despite the tight score, Fortunato says she knew her players could pick it up once they created ball movement.

Quinnipiac got its first goal of the second half with 12:43 left in regulation. Antonacci scored her second goal of the game and gave the Bobcats the 9-7 lead. She followed up with an assist to Kuhn on Quinnipiac’s next goal with 9:38 left in the game.

“[Manhattan] was a scrappy team and getting mad and we just help our composure,” Kuhn, who finished with five goals and two assists, said. “We were really working together today.”

Kara Hodapp scored Manhattan’s eighth and final goal with 7:17 left in the game before DeVito and Kuhn tacked in the Bobcats’ final two goals to cement the 12-8 victory.

Quinnipiac improved to 6-1 all-time against Manhattan and moves above the Jaspers for eighth in the MAAC standings.

“We’re not last in the MAAC now. That’s what we were fighting for today,” DeVito said. “We 100 percent did that. Manhattan played well, but we played better.”

While the day commemorated the seniors, DeVito recognizes how Saturday’s victory can help the program moving forward.

“I know the seniors were working just for our last game, but also just to leave something good for everybody else to start off on next year,” DeVito said. “So that was really awesome to get that done.”