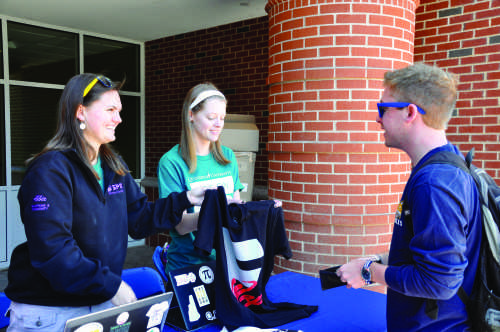 SPB is selling merchandise in preparation for Fetty Wap to headline Wake the Giant on Friday.

Quinnipiac is feeling the buzz of anticipation for Fetty Wap to Wake the Giant on Friday, April 22. Tickets sold out within minutes of going on sale for undergraduates, despite the slight disruption in ticket sales.

Fetty Wap’s show is the first Wake the Giant concert to sell out since Ke$ha in 2010, and the first show to sell out from undergraduates alone. William Singe, who got his start on YouTube, will be the opening act for Fetty Wap.

Fetty Wap seems to also be charged with excitement for the concert, taking to Twitter to say, “ayeee QU! s/o on the sold out show… see you on April 22nd #WTG2016” and tagged the Student Programming Board Twitter account.

Alexandra LaMagna, the main stage chair of Student Programming Board, said she began working on the Wake the Giant concert right after Fall Fest because she wanted it to best one yet. To begin, LaMagna contacted her agent with a list of names of artists the board was interested in and then got prices and dates for these performers.

SPB has been working tirelessly since Fetty Wap was booked last November according to LaMagna, planning out his contract details, organizing ticket sales for the event and getting the student body excited for the event.

“I threw in Fetty Wap’s name on there [the list], thinking like ‘There is no way I’m going to afford this guy, there’s just simply no way,’” LaMagna said. “And he actually ended up being in my budget and I was able to negotiate a price and we booked him in November.”

Before it was official, SPB sent out a survey to the school and the results showed students were very interested in Fetty Wap performing. So it was no surprise to LaMagna when the student body’s reaction to the reveal of Fetty Wap being the performer was overwhelmingly positive.

LaMagna and other SPB members are now taking care of final details for the big day such as raffling off the final tickets, making t-shirts and setting up the dressing rooms for the artists. She said there are several things SPB has yet to buy and gather for the performer’s private hospitality rooms that were requested in their contracts.

Some things Fetty Wap and Singe requested were Buffalo Wild Wings, fruit, pizzas, water and throat coat tea. According to LaMagna, these requests are simpler than what artists from previous years have asked for.

LaMagna encouraged students to go to the event, even if they do not prefer the artist who is performing, because it is a fun event to experience at our school and with the student body.

Chief of Public Safety Edgar Rodriguez said his department is preparing for Fetty Wap the same way it would for any concert, by combining its forces with Hamden police and Contemporary Services Corporation (CSC), the security that Fetty brings with him. Rodriguez is confident students will be safe and everything will be kept in order.

“I think we’ve had good luck and everybody pretty much behaves,” Rodriguez said. “You always get one or two students that misbehave but for the most part it goes pretty smooth.”

Rodriguez is following the basic security detail plan of every concert the school has. He said he won’t change the method just because this year’s Wake the Giant concert is sold out.

As for the line to get into the concert, Rodriguez said it will be much more controlled and orderly than that of the Yale hockey game a few months ago. Students can expect to be let in on time to enjoy the show.

“Enjoy the concert and act responsible. It’s exciting for everybody, and it’s sold out which is great,” Rodriguez said. “And I hope Fetty Wap brings a good show. The number one priority for us is the safety and concern for all our students, faculty, and staff.”

Freshman Kristin Pantelis got a floor ticket and is looking forward to the event.

“I’m very excited, one of my friends from Uconn [University of Connecticut] went last weekend and sent me videos and said he was really good” Pantelis said. “I like all of his songs so I’m excited to sing along.”