Baseball walks off in the ninth, beats Iona 3-2 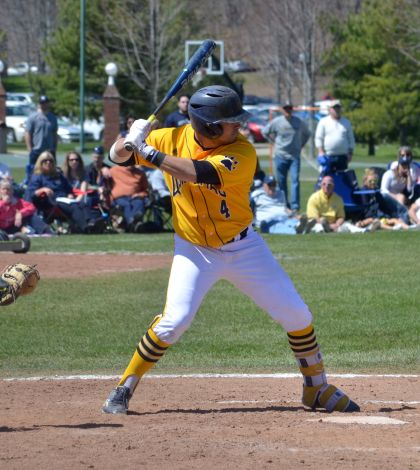 John Bodenhamer capped off Quinnipiac baseball’s doubleheader sweep against Iona with a walk-off single in the 13th inning of a 4-3 win after winning the first game 2-0. On Sunday, the Bobcats left the Gaels on the field once again with another walk-off single.

Lou Ionnatti sent in the winning run at the Quinnipiac Baseball Field with a walk-off single to right field off Iona’s Kyle Ackley. Aron Fried came in from third to secure Quinnipiac’s 3-2 win and a series sweep over the Iona.

“[The walk-off] means a lot,” Ionnatti said. “We struggled a little bit starting off the conference weekends. So it’s just big to get a sweep here.”

The Bobcats nearly trailed going into the bottom frame. Matt Byrne got the Gaels going with two outs in the ninth with a single off Quinnipiac pitcher Robbie Hitt. Lou Matarrazzo reached on an error in the next at-bat.

Niko Switalla then came up with runners on the corners and hit a groundball to Quinnipiac shortstop Matt Batten. Batten slid to his right and looked to second for the force out. He regrouped, fired a throw to first and got Swittalla out on a bang-bang play.

“That’s how you can tell our season is kind of turning,” Batten said. “Earlier in the year that call is going against us. Now it’s going for us and that’s momentum for us. I was happy I was able to make that for Robbie.”

Fried led off the bottom of the ninth with a single to center. After Brian Moskey bunted Fried to second, Ackley intentionally walked Batten. Rob Pescitelli loaded the bases with a bloop single to right before Ionnatti ripped a 1-0 pitch to right field for the walk-off single.

Quinnipiac starter Alex Vargas nearly derailed the Bobcats in the first inning. After forcing the leadoff hitter out with a dribbler in front of the plate, he walked the next three batters. He then got Carmine Palummo to pop out to second and ended the inning as Byrne a groundout to second.

The Gaels went on to leave the bases loaded in the third and fifth innings as well. The team ended the loss with 15 total runners left on base. Quinnipiac head coach John Delaney said his pitching staff proved throughout the weekend that it could bend while not breaking.

“Our pitching, all weekend, was exceptional,” Delaney said. “They threw strikes, eliminated free bases and pitched great. We gave up two runs today and yesterday was pretty limited in how many options they had. When [Iona] did score runs, it was a one inning thing.”

The Bobcats pounced on the board just two at-bats into the bottom of the first. Brian Moskey hit a double to left, stole third and scored on Matthew Batten’s single to right field.

Iona tied the game as Vargas walked Alex Beckett with the bases loaded to plate Kyle DiVico with one out in the third. Matthew Lorenzetti relieved Vargas with one out in the fifth and Beckett drilled a single over the second baseman to drive in Palummo and give the Gaels a 2-1 lead.

The Bobcats tied the game in the bottom of the eighth. Batten trotted home after Andrew Pucillo threw a wild pitch. Julius Saporito flew out to center field with the bases loaded to end the eighth and send the 2-2 game into the ninth.

The win puts Quinnipiac, who started the series a game behind Iona in the Metro Atlantic Athletic Conference standings, in seventh place in the conference. The Bobcats return to the diamond on Tuesday with a game at Albany. The team’s next MAAC action is on Saturday as it hosts Manhattan (10-22, 3-6 MAAC) in a doubleheader. Delaney said the win was pivotal for the team as it works its way up the conference standings.

“To come out with a walk-off again today like we ended yesterday is huge for, I think, the morale of the team,” Delaney said.