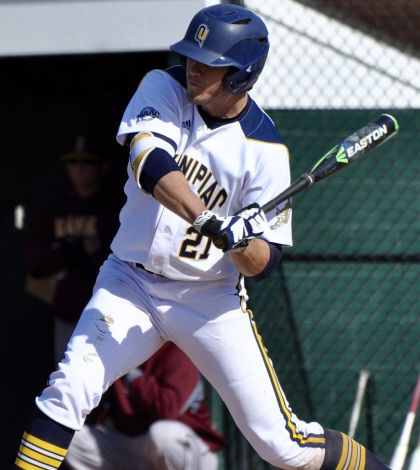 The first game featured Bobcats junior starting pitcher Thomas Jankins (3-4), was pitching a no-hitter into the eighth inning before he let up two singles. However, he was able to get out of the jam giving up no runs. 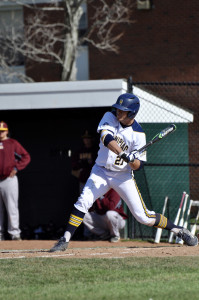 “That lifted us big time,” junior Matt Batten said on his teammate’s pithing performance. “We were not swinging well, we were off our game. Jankins was just dominate, they had no chance against him today.”

Jankins ended up pitching eight innings, striking out eight and only walking one batter.

Sophomore Robert Hitt came in to pitch in the ninth, getting the Gaels to go down in order to earn his fourth save of the season.

“Jankins came out and he threw unbelieveable,” Quinnipiac head coach John Delaney on his team’s pitching in game one. “Then Hitt came in and closed the door at the end. Those were two great pitching performances by those two guys.”

The Bobcats scored their first run in the third when Batten, who had three hits in game one, singled to right off of Gaels starter Bill Maier (0-4) and scored freshman Brian Moskey who doubled in the previous at-bat.

Moskey scored again in the eighth when senior Rob Pescitelli hit a sacrifice fly to left putting the Bobcats up 2-0.

The second game was a back and forth contest between the teams that didn’t get settled until the 13th inning.

The inning started when Pescitelli got on base due to an error and then moved to second after a sacrifice bunt by senior Lou Iannotti.

Senior John Bodenhamer, who had came in to pinch hit earlier, singled to right off of Vinny Martin, allowing Pescitelli from second to give the Bobcats a 4-3 win.

“The team’s focus and energy should already be there,” Delaney said on the extra-inning win. “I think that’s the one thing we had all day today. It’s all about staying confident no matter what the score is.”

The second game had some defensive woes for the Bobcats, as they committed three errors in the third inning.

Bobcats starting pitcher, sophomore Taylor Luciani, caught a ball hit right at him but when he tried to double the runner at third, he threw the ball away. This allowed two runs to score for the Gaels, putting them up 2-0.

After the Gaels went up 3-2 in the fifth, the Bobcats tied it in the sixth when junior Matthew Oestreicher singled to left to score Pescitelli.

The Bobcats and Gaels face off again on Sunday afternoon.