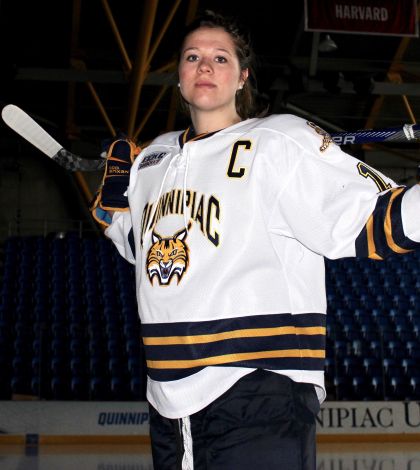 Few roles in all of sports are more important than that of the hockey captain. Regarded as the face of the team, a captain is responsible for leading the team both on and off the ice.

Quinnipiac women’s ice hockey forward Emma Woods has now stepped into that role, as she has been unanimously voted by her teammates to captain the Bobcats during the 2016-17 season. 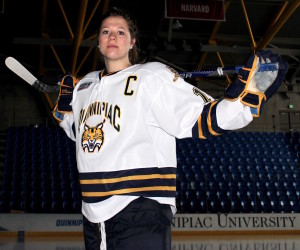 The Ontario native inherits the position very qualified, as she served as the captain for her high school and junior hockey teams prior to coming to Quinnipiac. Woods also served as an associate captain this past season behind senior defender Cydney Roesler and alongside senior Kristen Tamberg.

“Without question, Woods is the hardest working person on the team and over the past three years she’s really grown into a skilled hockey player and mature leader.” Roesler said, “Everyday she puts in extra work both on and off the ice because she knows that by doing so, she’s helping the team.”

Roesler feels that it is Woods’ work ethic and drive that will lead her to be a fitting successor and great captain for the Bobcats.

“I think she will do an amazing job leading this team next year because she’s so incredibly driven. She’s bought into the system and challenges others to push themselves.” Roesler said, “Not only has she developed into a great hockey player in her three years, but she’s also motivated multiple of her teammates to get better.”

Woods expressed her gratitude about being bestowed with the honor of captaincy.

“It’s hard to put into words, but I’m very honored,” Woods said. “With our team we have so many leaders where there are moments when anyone can step in at any given moment, which makes the fact that all these great leaders would vote for me is humbling.”

Woods credited the things she learned in her time playing alongside Roesler as helping her prepare to step into the captaincy.

“During my time here, I always looked up to the leaders above me. Cydney has been a great leader on our team and role model to me over the last three years and I have big shoes to fill,” Woods said. “Watching her and the way she deals with situations and problems in the team and her overall composure, that I can really learn from to grow as a leader.”

The biggest key that Woods wants to take away from Roesler’s captaincy was Rosler’s ability to maintain a level head, no matter what the situation, and lead her team by example.

“Cyd is someone who always led by example and was one of the strongest players on our team. She may have had a tough year due to her injury, but she always tried her hardest and led both on and off the ice,” Woods said. “In big situations she was never nervous or excited, just calm and that’s a presence that helps the team in those big moments.”

The influence of the captains from her first three seasons has been apparent, as it has shown through Woods’ growth both as a player on the ice, and as a mature leader off it. This development as a student athlete has enabled Woods to build a strong relationship with both teammates and coaches alike.

“Her maturity has really improved, and her ability to influence her teammates is outstanding,” Turner said, “She has a great connection with everyone on our team, and I know that they all feel comfortable going to talk to her. She has something special too, she is always willing to say what needs to be said, even if it is difficult.”

“She is confident holding her teammates accountable and pushing them, as opposed to being in a position where she needs to be picking them up.” Turner said, “She is a very balanced leader, and someone we think can take this team to a championship.”

While Woods’ leadership qualities are still developing, the area where she really shines is on the ice. The leading scorer amongst the players returning for the 2016-17 season, Woods’ 83 career points is the fifth-highest total in program history, while her 35 goals and 48 assists place her ninth and sixth, respectively, in the Bobcats’ record book. Woods impact is not limited to the offensive end, as she also led Bobcats’ forwards in blocked shots last season with 21.

“If I were to say [Woods’] biggest strengths would probably be things she does without the puck, it is not even necessarily her shot which is outstanding,” Turner said. “It is how she defends, how she forechecks, how she uses her body and strength to be able to make plays and get the puck back.”

Last season, while playing on the Bobcats’ top forward line alongside sophomore T.T. Cianfarano and freshman Melissa Samoskevich, the trio proved to be a headache for the opposition. During the Bobcats’ 38-game season, the three combined to score 55 goals.

Playing alongside Woods, Cianfarano, in particular, came into her own this season, as she lead the Bobcats in all three scoring categories with 52 points from 28 goals and 24 assists on her way to being named both the ECAC forward of the year and ECAC player of the year.

Not to be outdone, Woods’ efforts last year amounted to a breakout season, as her 34 points and 23 assists were both career highs. Additionally, her point and assist totals this past season were good for third on the team and her 11 goals were the fourth most on the team. Her outstanding play earned her a place on the All-ECAC third team.

Cianfarano credits playing alongside Woods this season for helping her figure out the nuances of playing as a wing for the first time and help them both reach an overall new level of performance on both ends of the ice.

“This was my first year as a winger, and I struggled a lot and got frustrated very easily. I wasn’t happy with the way I was playing in the defensive zone.” Cianfarano said, “I think Woodsie being the center really picked me up, and taught me a few things here and there that helped me get comfortable as a winger.”

Cianfarano attributes Woods’ skills as a communicator as what most aided her transition to the wing, and overall improvement throughout the course of the season.

“I think having the communication skills with her is fantastic.” Cianfarano said, “If I’m doing something wrong she isn’t afraid to tell me immediately, and if something isn’t going right we will talk about it and figure out what we can do to improve it. Just being around her motivates me to work harder and improve as a player.”

Cianfarano feels that those qualities that drove her to get better will drive the team to work hard to improve during the spring season, and next season. Paired with Woods’ commitment to the sport, and her fiercely competitive nature, Cianfarano and her teammates expect great things from their new captain.

“She is very committed and loves what she does. She is a great team player, she makes everyone around her better, and everyone around her loves her,” Cianfarano said. “She is ready for it and I know she has had experience wearing a C before college, so we are all excited to play for her as our captain.”

With Woods now leading the charge, the Bobcats will look to build on their historic success from this past season. After setting a program record in Turner’s first year as coach by going 30-3-5 during the season and winning their first ECAC regular season championship, the Bobcats topped Clarkson 1-0 in the ECAC tournament championship game to win their first conference tournament in program history.

The Bobcats’ season, however, ended on a low note, as they were upset 1-0 by familiar foe Clarkson in the first round of the NCAA tournament. Instead of dwelling on the loss, Woods and the rest of the team are using the experience as motivation, and have their eyes set on their goals for next season.

“As a team, we obviously want to retain both of our ECAC championships. Accomplishing that was an amazing feeling, so we would love to stay at the top of the ECAC.” Woods said, “We also always strive to be in the top four or five teams in the country. However, our main goal next year is advancing to the Frozen Four, and winning our first NCAA tournament.”