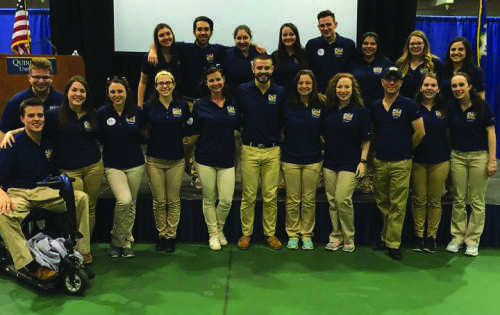 Quinnipiac’s seventh annual Big Event had its biggest turnout yet, with 1,800 students and 100 alumni participating in Saturday’s volunteer day at over 100 different sites throughout the greater New Haven area.

“We are really excited about the large numbers,” Brumleve said. “We were really, really excited because we just tried to make this event even bigger than it’s ever been before and really just go out with a bang.”

Kipp Hopper, freshman biomedical science major, said he participated with the Honors Program at QU. His group went to Canal Line off of Pine Street and picked up litter and broken glass.

“It was a good experience that kept me in touch with my future goal of becoming a doctor, who works for the community every single day,” Hopper said. “I hope I can do this all four years I’m here.”

For Hopper, giving back is important and the Big Event was just one of the reasons why he chose Quinnipiac.

“I asked about a community activity that draws the biggest crowd together from campus,” Hopper said. “And my counselor told me that Big Event was the event on campus where people met together to accomplish something greater.”

The Big Event is a nationwide community service day on college campuses, but it did not come to Quinnipiac until seven years ago when former student Jen Walts brought it here, senior occupational therapy major and co-director of the Big Event executive board Gianna Costantino said.

“[Walts] literally just started it out of thin air with her and her friends,” Costantino said. “They pulled it together and obviously they had to get so much recognition in such a short amount of time.”

The first Big Event had around 300 to 500 people. It was then turned into an organization on campus and is now sponsored by the Student Government Association and Community Action Project.

The weather leading up to the event was unpredictable with snow, ice and rain. But on the day of Big Event it was sunny.

“We had nonprofit sites canceling on us, so that was very stressful,” Costantino said. “But we really lucked out it was a beautiful day. It all came together.”

Places don’t expect student volunteers to show up with bad weather, but in the past they’ve been pleasantly surprised, Brumleve said.

“They’re so appreciative,” he said. “And that’s the reason we get asked back every year, we always check with them and we always get asked back to certain sites and it’s really great because we know that they need it, but they really really appreciate it once we actually do go.”

“New Haven has this day that is always on the day of the Big Event and [so does] Hamden Youth Services. We sent like 300 people there for their huge clean up,” Costantino said. “Everyone has a different name for it but it’s all funneled by us. It’s definitely improving our relationship with Hamden and that’s what we want.”

Since this year was the Big Event’s biggest turn out, Brumleve believes the committee publicising throughout organizations and freshman dorms impacted the amount of volunteers. He also believes that this year’s larger freshman class at Quinnipiac gave the Big Event staff a better chance to reach out and get as many volunteers as possible.

In the future, the committee plans to grow the Big Event. Along with expanding into neighboring towns, the group is also looking changing where students meet at the beginning of the day. Currently, students meet in the recreation center before they go off to their volunteer sites, but the recreation center has an 1,800 person capacity, limiting how many people can participate.

“There are a lot of things we are talking about, moving it up to the York Hill TD bank because it’s a bigger venue and it makes a lot of things easier,” Costantino said. “If we continue to expand then that is something that we need to talk about.”

Hearing back from volunteers and volunteer sites is also important for the improvement of the event.

“We get general feedback from sites as well as the people who go to those sites,” Brumleve said. “I would say that we get a general positive feedback, they’re really grateful.”

Although Hopper enjoyed the event and is eager to get involved next year he did have some concerns, he said making time to give back should be more than just a day.

“Picking up litter in a neighborhood for three hours out of the year doesn’t really compare to the habit of picking up litter for 10 minutes every day, and I know almost anyone can make room for 10 minutes of cleaning,” Hopper said. “Most of the activities we accomplished at the Big Event were not exceptional; the most noteworthy statistic was the turnout.”

Katlyn Carr, freshman athletic training and physical therapy major, said in an email that she and her friends were sent to a YMCA day camp. They moved picnic tables, as well as raked and cleaned the boat house. Carr said she loved being involved with the Big Event.

“On this one day, we aren’t part of different friend groups, majors, clubs, or Greek organizations, but we joined together as members of the QU community,” Carr said.