What TV Should Learn From The Walking Dead Finale 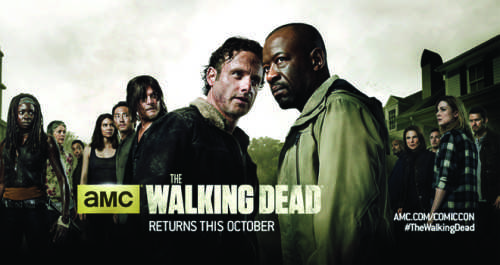 WARNING: The following article contains spoilers from season six of The Walking Dead and season five of Game of Thrones.

“You can breathe, you can blink, you can cry…hell, you’re all gonna being doing that.”

Negan, The Walking Dead’s new and highly anticipated antagonist, says those words in the season six finale, “Last Day on Earth” immediately before he beats someone to death with a baseball bat. That line of dialogue stands out compared to the rest of Negan’s season-closing monologue because with it he is addressing the audience just as much as he is the characters. Episode writer and Walking Dead showrunner Scott Gimple uses that line to warn his audience that this death will devastate fans.

But after viewing “Last Day on Earth”, audiences weren’t devastated. Instead, they were disappointed, angry and annoyed. And they had the right to be.

Gimple and his writers decided to end season six without revealing who Negan killed. Instead of shocking audiences with a memorable death, they are forcing their fans to wait six months before receiving a clear answer. This decision was an incredibly foolish mistake that represents how The Walking Dead somehow believes audiences will be satisfied with cheap cliffhangers. However, those audiences are making it abundantly clear how dissatisfied they are.

“Last Day on Earth” has 45 percent “rotten” rating on Rotten Tomatoes, with the critic consensus reading “the meandering episode — and its manipulative cliffhanger ending — make for a disappointing season finale.” On the Internet Movie Data Base,“Last Day on Earth” has user rating of 5.7, the lowest rating of any episode of The Walking Dead. The most popular user review from the site awarded the episode a 1/10 rating and declared it “a total waste of time.” Of the 507 IMDB users that voted on the quality of the review, 426 agreed with the reviewer.

This is not the first time The Walking Dead has valued a cliffhanger over effective storytelling. Earlier the same season, an episode ended with Glenn being devoured and presumably killed by walkers only to reveal a few episodes later that he miraculously survived. Both Glenn’s assumed death and the omission of Negan’s victim reflect how The Walking Dead does not trust its audience. The writers create these episode-ending moments hoping they will entice viewers to return, but all they are doing is teasing their fans. Viewers do not want to spend months between seasons asking, “who did Negan kill,” they want to spend that time thinking, “I can’t believe Negan killed so-and-so!” The Walking Dead finale should serve as a reminder to the television world that you must trust your audience.

Let’s compare Negan’s scene with another season ending moment from another popular fantasy series, Game of Thrones. Season five of Thrones ended with Jon Snow’s murder at the hands of his Night’s Watch brothers. Similar to Negan’s reveal, the entire season had been building to Jon’s death. The mutineers distrusted Jon’s sympathy for the wildlings, were upset he executed Janos Slynt and believed his actions went against the Watch’s needs. All those events culminated in the devastating scene in which the brothers declared Jon a traitor and stabbed him. Game of Thrones, unlike The Walking Dead, trusts its audience enough to give them a satisfying ending. The Thrones writers believe that their viewers care enough about the content to return next season, and therefore the show doesn’t have to rely on shock value.

Fans of The Walking Dead comics that the show is based on consider Negan’s introduction to be one of the best moments in the entire series. Unfortunately, the scene they were eagerly awaiting ended up being a disaster. However, the disaster could have been avoided. The season had been successfully building to this moment, Jeffery Dean Morgan is a fine actor that put in a solid performance as Negan, and all Gimple had to do was adapt the scene from the comic, but despite all it had going for it, the scene falls apart once Negan starts playing “eeny, meeny, miny, moe.” That is when it becomes clear that this scene isn’t Negan toying with the protagonists, it’s The Walking Dead toying with the fans. The show blatantly taunts the audience with Negan’s “tough decision.” They’d might as well have had him yell “one of your favorite characters is gonna die, you’d better come back next season to find out who!” Combine that with the ridiculous first person camera angle-complete with Goldeneye N64-esque blood running down the screen and a moment that could have been incredible ends up being laughable.

By refusing to show Negan’s victim, The Walking Dead insulted its audience. They decided to replace a shocking and satisfying ending with a cheap ploy to get viewers to return next season. The television industry should learn from The Walking Dead that audiences need you to trust them. If you give the audience the ending they deserve like Game of Thrones did they will always come back for more, but if you have to rely on cheap moments your fans will turn on you.