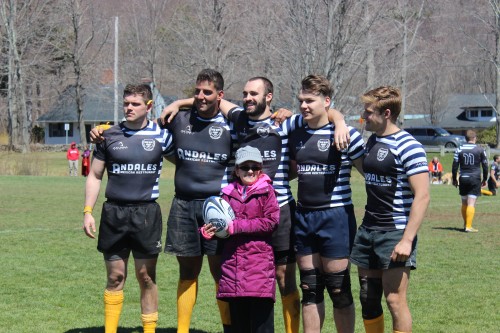 The Catholic Rugby Crew hosted a charity game on Sunday, April 10 in which they invited New Blue Rugby and the University of Hartford rugby teams to play each other in effort to raise money for Lauren’s First and Goal.

The charity hits close to home for the Catholic Rugby Crew, as one of their own is closely related to a relative of Lauren Loose, the inspiration for the non-profit group, which supports cancer services and brain tumor research.

The Catholic Rugby Crew, a social fellowship program that comes out of the Catholic chaplaincy at Quinnipiac, raised around $2,500 tabling in Tator Hall, accepting donations and giving away bracelets promoting Lauren First and Goal–the name of Sunday’s game.

New Blue Rugby, a rugby team based in Hamden composed of Quinnipiac students but unaffiliated with the university, had an online fundraiser and raised $1,700 and also contributed apparel for the raffle that occurred at halftime during the game.

At nine months old, Loose was diagnosed with malignant sarcoma and a genetic disorder called neurofibromatosis. Loose had to undergo extensive chemotherapy and several surgeries, according to captain of New Blue Rugby and senior coordinator for the Catholic Rugby Crew PJ Ruttura.

Today, Loose is an 18-year-old brain tumor survivor and both her and her family maintain the charity, which aims to raise money for cancer research and services for diagnosed patients.

The game took place Sunday afternoon on the intramural field and brought over 500 spectators. Catholic priest and head of the Catholic Rugby Crew, Father Jordan Lenaghan, said the fan base was more than just students.

“The fans were terrific. But it was not only students out there, but parents, family, alumni and staff,” Lenaghan said. “Everyone came out to support and it makes you proud to be a Bobcat when that happens.”

There were two games within the event. The A side, which was varsity, tied 28-28. New Blue Rugby was victorious against University of Hartford Rugby on the B-side, the junior varsity game.

Among the crowd, his fellow Quinnipiac community and while watching the charity event Lenaghan said he felt like he was witnessing the ultimate college experience.

“It struck me during the B side game,” he said. “It was later in the afternoon and the sun hit the buildings with a certain light and I looked at the field and saw the freshmen and sophomores out there playing with the QU buildings in the background. And I thought this is what the collegiate experience is.”

Lenaghan said he was impressed by the behavior of the students who were involved.

“The level of sportsmanship and gamesmanship—exceptional,” he said. “The last thing that [the students] did after everyone went home was walk that field to make sure there wasn’t a candy wrapper or stray piece of paper on the ground they make sure that they didn’t leave anything.”

The Catholic Rugby Crew began three years ago after Lenaghan approached a student in his congregation about what appealed to him. Shortly after, the Catholic Rugby Crew was created and overtime the group grew from being only Lenagan and two other students to nearly 50 students congregating every Thursday night. Lauren’s First and Goal charity game was the group’s first non-profit work on campus and Lenaghan said he believes the charity game was a success.

“It was an incredible experience,” Lenaghan said. “The students that I work with in the Catholic Rugby Crew who were involved are some of the finest students I have dealt with at QU. The way that the New Blue students and the CRC students conducted themselves epitomizes for me highest qualities of what we look for in a Quinnipiac student.”