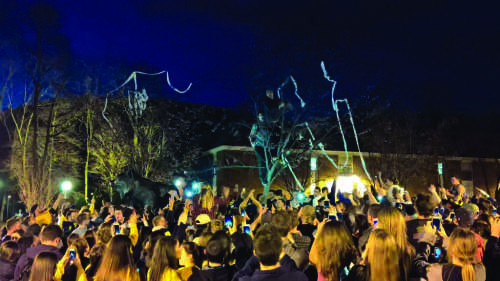 Students gathered around the Bobcat statue on the Mount Carmel campus after the men’s ice hockey team defeated Boston College in the Frozen Four semifinals on April 7.

No trees were harmed on the Mount Carmel campus Saturday evening, despite the men’s ice hockey team’s loss to North Dakota University (UND) in the Frozen Four championship game.

This is a stark comparison to the celebration on April 7 after the win against Boston College in the Frozen Four semifinals. During the celebration, some students climbed a tree, rocked it to the ground and set the brush on fire. Two freshmen were arrested at the scene.

However, Chief of Public Safety Edgar Rodriguez said students were well behaved after the loss to UND on Saturday.

“We were all upset that Quinnipiac lost the hockey game,” he said. “However, everybody was responsible and people behaved.”

Rodriguez said there were 12 Public Safety officers on campus, as well as 12 Hamden police officers who were patrolling on campus and in the Hamden neighborhoods on Saturday. But he said he is not sure if students were respectful simply because of the amount of personnel on campus.

“I think the students stepped up to the plate and realized that it is okay to celebrate but that they should do it the right way,” he said.

Rodriguez said he believed students were responsible because the university reminded them to be.

Freshman Lauren Gonzalez said she was walking back from the shuttle stop when she heard about what was happening on Bobcat Way on Thursday night.

Senior Daniella Knafo is not a stranger to the rallies that occurred after the win Thursday night.

“I feel like it was kind of the same thing [as my freshman year]…we won the game and people were still doing such malicious things, which really doesn’t make sense to me,” she said.

Vice President and Dean of Students Monique Drucker sent an email on April 8 to the student body addressing the events that happened after Thursday’s victory.

This email was sent the day after the Hamden Police Department charged freshmen Robert Amonica and Maxime Giesen with first-degree criminal mischief after the Frozen Four celebration on April 7. The students are scheduled to appear in Meriden Superior Court on April 21, according to the Hamden Patch.

Gonzalez said she thinks there was no vandalism on Saturday because students were upset over the loss to UND.

“I saw more vandalism and trees getting broken and whatnot on Thursday when we won,” she said. “On Saturday it seemed a lot more quiet. I mean, yes there was definitely shouting and whatnot but there wasn’t any vandalism that I saw.”

Associate Vice President for Public Relations John Morgan said the two students have been suspended from the university pending their student conduct meetings. He said overall the students who were celebrating acted appropriately.

“Fortunately, the majority of our students were well behaved and none were injured during Thursday night’s celebration,” Morgan said in a statement.