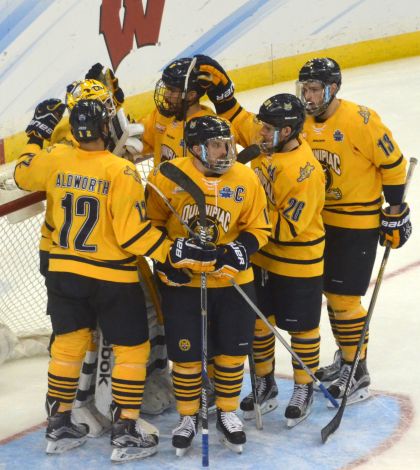 Time and time again, a different version of the same question was asked to members of the 2015-16 Quinnipiac men’s ice hockey team.

Sure, the narrative is similar. In 2013, the Bobcats got to their first NCAA Frozen Four, ultimately losing to rival Yale in the national championship game.

And this year, the program got to another national title contest. Again, it fell just one game short – losing to North Dakota 5-1 at Amalie Arena in Tampa on Saturday night. 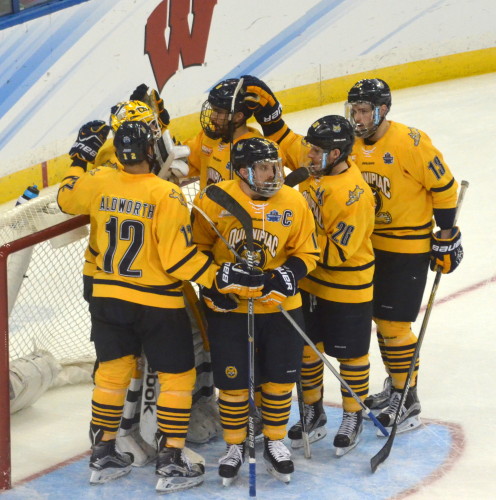 So it does make sense for people looking at Quinnipiac men’s ice hockey from a distant perspective to draw comparisons between the only two teams to ever reach the Frozen Four.

But beyond that simple fact, searching for any comparisons between the 2012-13 team and the 2015-16 team seems misleading.

Inevitably, Quinnipiac head coach Rand Pecknold was asked to juxtapose the two teams just minutes after the Bobcats fourth loss of the season on Saturday.

“You know, it’s different. Different circumstances,” Pecknold said. “I think that year [2012-13] we had beaten Yale three times, and beaten them three times easily…So that, to me, I really felt we were the better team that year. I still do.”

“I think what North Dakota showed tonight is they were the better team,” Pecknold continued. “Doesn’t mean we couldn’t beat them. But that’s the best team in college hockey.”

Pecknold, as you can see, decided to compare the two Frozen Four teams for only a few moments. He then elected to talk about both Yale and North Dakota as opponents.

But he’s highlighting something important: No season is like another. A program, especially in college hockey – where personnel and team identity change extremely fast – is comprised of completely different variables from year to year.

It’s not to say that one group of players is better than the other, or one specific player is superior to another. That’s an argument any two bystanders can have.

And Quinnipiac going on a 18-game streak without a loss to begin the season this year isn’t the same as the 2012-13 team’s 21-game unbeaten streak from early November to late February.

“It’s always hard to compare teams year to year,” Quinnipiac captain Soren Jonzzon, who was a part of both teams, said prior to the Frozen Four. “From that team, there’s pretty much one guy in the lineup that played that year. I think [the comparisons] just have a lot to do with the resiliency.”

So the point is simply this: You can’t really compare two teams from different years. Though the story is a bit similar, the personnel is vastly different.

Instead, we should be reflecting on the incredible run that the 2015-16 men’s ice hockey team just had. The Bobcats went 32-4-7 in 43 games, which is impressive in itself.

So take time to reflect on the performances of the individuals that comprised this year’s team, and, ultimately, what the program accomplished as a whole.

And stop asking Rand Pecknold and the current Bobcats to draw comparisons to a team from three years ago.