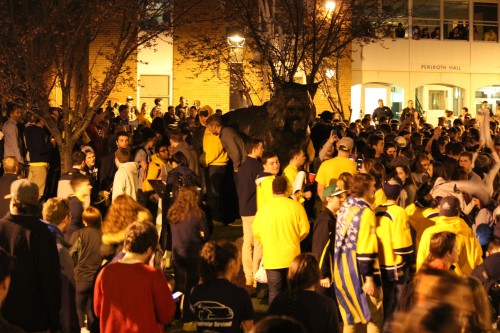 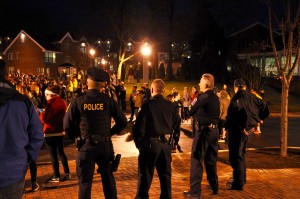 Students took to the bobcat statue on main campus Thursday night to celebrate the win over Boston College in the Frozen Four semifinals. During the celebration, students climbed a tree and knocked it over after trying to set it on fire.

Hamden Police confirmed freshmen Robert Amonica and Maxime Giesen were the students who were detained and charged. They are scheduled to appear in Meriden Superior Court on April 21, according to The Hamden Patch.

Morgan said the two students have been suspended from the university pending their student conduct meetings. He said overall the students who were celebrating acted appropriately.

“Fortunately, the majority of our students were well behaved and none were injured during Thursday night’s celebration,” Morgan said in a statement. 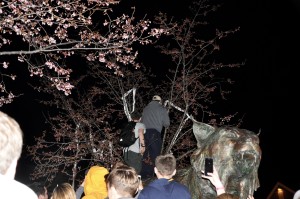 Morgan said both Public Safety and the Hamden Police are prepared for anything that could happen during and after Saturday’s game.

“The University’s Public Safety Department will continue to work closely with the Hamden Police during Saturday’s NCAA Frozen Four championship game to maintain the safety and security of all members of the university community,” he said in the statement.

Chief of Public Safety Edgar Rodriguez said Public Safety and Hamden Police Department will have extra personnel on the Mount Carmel campus during and after the championship game on Saturday.

“I think everyone is happy where we are with our hockey team, but people need to celebrate responsibly,” he said. “[Students] need to think about other fellow students that are out there celebrating and [students] cannot damage property, that will not be tolerated whatsoever.”

“There is no need for [students to damage university property],” he said. “Everyone was having a good time and we want everyone to have a great time, but we need to be responsible and behave as adults.”

Stay with the Chronicle for updates.

UPDATE: This article was updated at 1:30 p.m. to add quotes from Chief of Public Safety Edgar Rodriguez.

This article was updated at 5:30 p.m. to add the names of the students who were charged and suspended.

Here is the video of a tree being knocked down by students on main campus last night.

Students knock down a tree by the bobcat statue on main campus. (Video by David Friedlander) pic.twitter.com/5aYihSBaxS