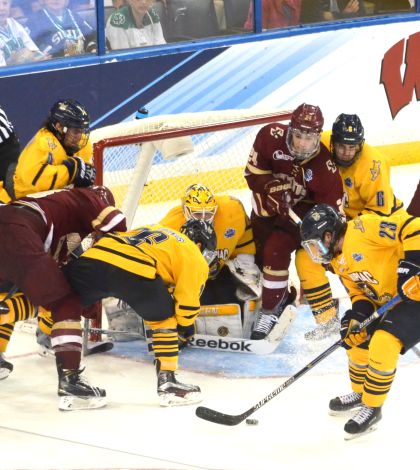 Before heading to Tampa for its second-ever appearance in the Frozen Four, top-ranked Quinnipiac men’s ice hockey had one goal in mind: play well enough to have a chance at winning the program’s first national championship on Saturday night. 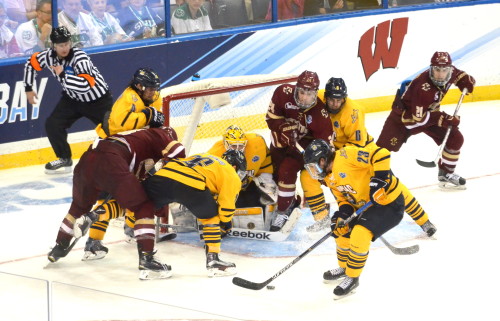 In order to do so, the Bobcats first had to get through an experienced Boston College program that was making its 25th Frozen Four appearance and had 12 NHL draft picks on this year’s team.

Quinnipiac accomplished its first Frozen Four goal by defeating Boston College 3-2 on Thursday evening at Amalie Arena, securing a berth in the NCAA National Championship game against the winner of Denver/North Dakota.

And for the Bobcats, stellar play from senior goaltender Michael Garteig and a relentless penalty kill were the keys to success.

“I thought Quinnipiac played very well. Certainly a team worthy of playing for a national championship Saturday night,” Boston College head coach Jerry York said. “So I thought they were hard. They were gritty. They got good goaltending. I think [Quinnipiac head coach] Rand [Pecknold] has an excellent team there.”

Coming into the matchup, Boston College scored on 21.5 percent of its power play opportunities, while Quinnipiac was ranked No. 3 overall in the nation in penalty kill percentage with an 89 percent success rate.

The Bobcats stopped the Eagles on four of their five power-play chances, with the one power-play goal coming after Garteig faced a flurry of shots in front of the net.

Even though Quinnipiac surrendered one power-play goal, the Bobcats only allowed the Eagles to attempt only eight shots on five power plays. On two different occasions, Quinnipiac didn’t allow a single shot on the power play.

“I thought they were very aggressive. They tracked the puck well,” York said. “[Quinnipiac] took away some of our passing lanes. So they did a nice job with the P.K.”

“I think they played within the structure well. They knew who our top guys were and what we were trying to do,” Boston College junior defenseman Steve Santini added. “They did great in the penalty kill, and unfortunately ended our season, but that’s hockey.”

Pecknold credits his team’s fearlessness to the success they have on its penalty kill defense.

“We’ve got some kids, they’re willing to do anything to win. They’re selfless,” Pecknold said. “Tommy Schutt had a huge shot block at the end, no fear, he’s going to drop drown and eat that puck.”

Despite the willingness of one player, Pecknold knows that it takes the effort of a group to be successful.

“It’s kind of one go, we all go. Like we can’t have three guys going and the fourth guy not,” Pecknold said. “I thought the compete was great on the P.K. tonight. The willingness to block shots. Our neutral zone was really good in kind of denying them entries.”

Though the penalty kill was strong, Pecknold believes that there is still room for improvement.

“The only issue we had was we lost more faceoffs than we normally do on the P.K. and had some failed clears where guys just got to have a little more poise,” Pecknold said.

Despite noticing holes in the penalty kill defense, Pecknold did nothing but rave about his goaltender’s play throughout the game.

“Garteig is a winner. All year long he’s been going up head-to-head with the top goalies in the country and he finds a way to win,” Pecknold said. “That’s what he’s done. He’s done it for us for three years.”

Garteig made 34 saves, but none bigger than the saves he made late in the third period as Boston College scrambled to tie the game.

“I thought we had two really exceptional chances to score that [Garteig] made unbelievable saves on,” York said. “One was low to his pad on the left side, and then when Ian put all the wood on it, four, five seconds left, he made a terrific glove save in the top, and that ended our season for us.”

Quinnipiac’s penalty kill and Garteig’s play in net helped the Bobcats earn 32 wins to this point in the season, and Pecknold believes if they stick to what’s gotten them this far then No. 33 will follow on Saturday in the NCAA Championship game.

“We don’t need to change anything,” Pecknold said. “We need to keep doing it, try to stay healthy for Saturday. And, again, play to our identity, and we’ll get our reward.”
[twitter-follow username=”Tyrell_Walden” scheme=”dark”]