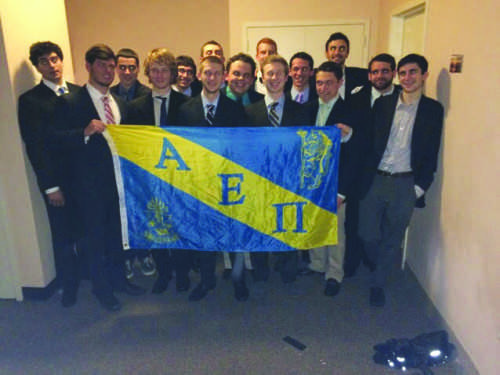 Above are some of the founders of the Alpha Epsilon Pi (AEPi) colony at Quinnipiac, which came to the university this year.

Alpha Epsilon Pi (AEPi), a culturally Jewish fraternity, is one of the new Greek life organizations on campus. Officially established in January, about half of the members are freshmen, according to freshman and Colony President Randall Frank.

When he first arrived at Quinnipiac, Frank rushed existing Greek life organizations, but he felt like there wasn’t a niche for him.

“I just felt that there was something missing, and that ‘something’ could be expanded,” Frank said.

AEPi was that something missing for Frank, as he wanted to bridge the gap between his culture and his college experience.

Many of the founding fathers had already been familiar with AEPi, according to Katherine Pezzella, director of fraternity and sorority life. She also said AEPi, at the parent organization level, is known for offering leadership roles for high school men.

Jon Becker, AEPi’s vice president, said he and some of his brothers first learned about AEPi from camp counselors at a Jewish summer camp they went to.

Even though Becker chose to come to Quinnipiac, he said he was disappointed that the school didn’t have an active AEPi chapter. After talking with some of his peers, Becker thought it was “a cool idea” to bring AEPi to Quinnipiac.

When the founders first wanted to bring AEPi to campus, Pezzella wanted them to make sure that their other options were exhausted.

Pezzella encouraged them to connect with Zeta Beta Tau (ZBT), another Jewish fraternity at Quinnipiac. However Pezzella said Quinnipiac’s ZBT chapter has fewer Jewish men and less cultural programing than chapters at other schools, and therefore was not the experience that AEPi’s founders were looking for.

After realizing that AEPi would not be a duplicate organization, discussions began between the Office of Fraternity and Sorority Life, Rabbi Reena Judd, AEPi International and the students, Pezzella said. Toward the end of the fall 2015 semester, Frank gave a formal presentation to the Interfraternity Council (IFC), and after some deliberation from a special committee, AEPi was able to start operating on campus.

“When we got [recognized], it was just unbelievable because of the fact that we didn’t even think there would be a demand at this school,” Becker said. “But just like that, we have [23] guys right now, and that’s pretty good for the first semester.”

Frank acknowledges that there was a learning curve when he got started.

On the second day of being the president, Frank said he felt stressed because of the reality of the work he’d have to put in as the president. But he said other Greek life organizations have helped him out, receiving AEPi “with open arms.”

Pezzella said she was surprised with how quickly AEPi went through the process to recognition from the university. She said it normally takes about a year to be recognized.

“They are very enthusiastic, very motivated young men,” she said. “So it’s impressive to see how much work they’ve put into it and how they’ve, since recognition, hit the ground running with all the things we ask all fraternities and sororities to do… I’d say they’ve gone above and beyond what I’ve expected of them.”

If students want to bring a new fraternity or sorority to campus, Pezzella said there is no typical experience, as each group does things differently. Pezzella urges students to first meet with her or Caite Abrahamson, assistant director of fraternity and sorority life, so they can be helped through the process.

For Frank and Becker, they are looking forward to the future of AEPi. Coming up, the fraternity is holding “A Walk to Remember,” a Holocaust remembrance ceremony, on May 4. Among other things, the fraternity plans to double its size, gain a philanthropy and be promoted from a colony to a chapter during next year.

“We’re writing our own history,” Frank said. “It’s amazing to have four years to write our own story.”